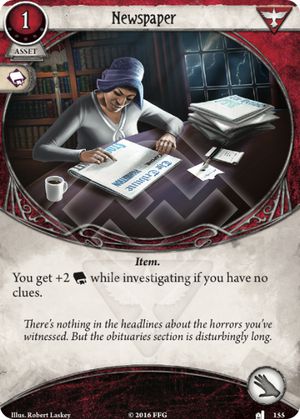 I've been using this in a few decks, and I've found it to be pretty handy. It's like a cheaper Flashlight, with some different restrictions.

I guess solo shouldn't mean you're empty of clues any more than in multiplayer games, but it does somehow feel that way, and the fact that Newspaper is cheaper, and not limited in the number of uses like Flashlight is great. It's not reducing the Shroud, though - so you can't get zero-shroud investigations (success, unless you get an auto-fail), but equally, you still get the benefit on Shroud 1 spaces.

It also seems to combo nicely with Burglary. That's an investigate action, but instead you don't get any clues - so it remains in effect for next time.

It definitely feels like an alternative, possibly improved, flashlight, and I quite like it. It seems to work well with Rex Murphy too; if he's without clues it makes the chance of him grabbing 2 with an investigation much greater.

AndyB · 864
I love the Burglary combo - that is thematically delightful (investigator reads paper, gets hint of where to rob) - and I like your notes. I think the other investigator who likes this is Ashcan Pete, as it's a static +2 intellect boost, which Duke enjoys! — zozo · 2337 4/5/17
There is a good reason you are without clues more often in multiplayer, the triggers that wipe you of clues occur more often and there are fewer clues to gather (not necessarily per person, but clue gathering isn't equally distributed in multiplayer) — Difrakt · 1013 5/11/17
This is one of those cards I need to use a lot to evaluate. It's situational for sure; and if you need a bunch of clues it's not going to help most of the time. But, it's really good in scenarios where you spend clues. I agree it's a good replacement for flashlight for Duke decks. Like Burglary; it's great in specific situations but does that outweigh the times when it isn't? — bigstupidgrin · 76 3/21/18
This card might work well with Rex when playing true solo, but with more than one investigator its going to count a lot less often. — shenaniganz11 · 7 10/27/20
I struggle to see the value of this card. Assuming 3 Acts that require clues to advance it, then Newspaper helps to investigate 3 clues, scattered over the scenario. That doesn't seem good, particularly in anything higher than solo play. What decks WANT this card? When is choosing this card the correct choice, over Flashlight or Old Keyring? — VanyelAshke · 148 11/25/20
@VanyelAshke: Well for one thing, Newspaper helps you out on investigate actions on other cards. For example, Flashlight doesn't work well with Ashcan Pete; he can use either Duke or the Flashlight, but not both at the same time. Ditto with something like Lockpicks. — ClownShoes · 21 1/19/21
The issue with pete taking newspaper is he can just take magnifying glass. — Zerogrim · 187 1/29/21