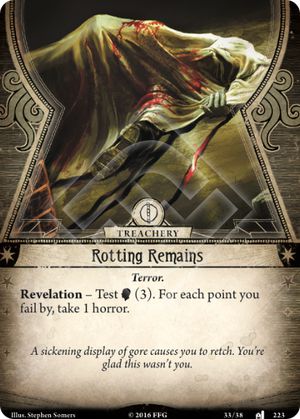 Many people will compare this card to the Rotting Remains card from the Core Set. However, a veteran player will readily notice there a few subtle differences.

The first difference of course is that the card doesn't come from the Core Set, but rather from the Blood On The Altar Mythos pack. This means that it will has a different encounter set icon , cycle set icon on the bottom, and different numbers. You will note that this doesn't have impact on the gameplay though, although it might become important in the setup and teardown phase. Putting a card away in the wrong encounter set is annoying, and is known to cause severe mental trauma.

The other difference is in the flair text. While the Core Set Rotting Remains has the text firmly split by the sentence, the Blood On The Altar version decides to shake things up by putting the words "You're" in the first row. This ups the ante significantly, since while reading the flair text you are effectively left with a blood curling cliffhanger referencing directly you, and it only gets resolved when you finally reach the second row, allowing you to breathe a sigh of relief.

Overall, a nice change and a fine improvement on the original design. Good work FFG.