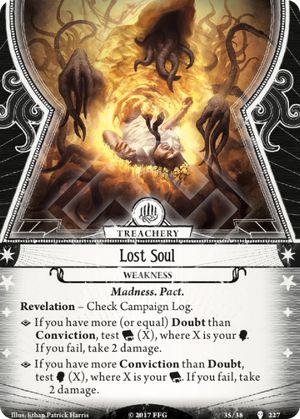 Note: There is some disagreement (see comments below)

This is not a review, instead it is for those lost souls who choose to play with Calvin Wright

Using the top part of this card in the example, the skill test timing is broken down to steps. ST.1 is that we determine that this is a [Intellect] skill test ST.5 is when modifiers are added to the investigators base skill value for the test type ([Intellect] in this case), if Calvin has 4 horror on him, then with his ability he will add +4 to a total modifier value of 4. ST.6 is when failure/success is determined. The difficulty of the test is Calvin's [Willpower]. As this is an [Intellect] test, at no point where we instructed to modify Calvin's [Willpower] value, so therefore the test difficulty is 0. As 4>0, Calvin is successful in this test.

This is not an official interpretation as one doesn't exist yet, I hope this helps!

KakuRainbow · 35
this is completely wrong; I'd suggest you reread the rules entirely because there are many concepts you missed. — jd9000 · 56 5/1/20
This would actually be an interesting ruling, because it would also affect cards like Read The Signs (where you add your willpower for the test - under this ruling you wouldn't get passive willpower bonuses) and cards like Ace of Rods (which gives +2 to multiple skills, but would only modify the ones that are "tested"). I am not sure how I feel about this ruling in terms of how it makes the game play. The way you describe it, it makes mechanical sense, but to me it seems un-intuitive and like a lot of people are likely to get it wrong while playing. — ArkhamInvestigator · 267 5/1/20
From p2 of the rules reference: "Constant abilities are simply stated on a card with no special formatting. Constant abilities are always interacting with the game state as long as the card is in play. (Some constant abilities continuously seek a specific condition, denoted by words such as “during” or “while.” The effects of such abilities are active any time the specified condition is met.) Constant abilities have no point of initiation." That means that Calvin's skills are always the modified values because the ability is always in effect. ST.5 is when you check the value as modified by constant abilities _as well as committed cards and the chaos token_; it isn't intended to imply that ST.5 is the only time at which Calvin's stats are boosted. — Monotone · 286 5/1/20
This is wrong. For it to test at 0 it would require the words “base intellect/willpower”. This test basically tests equal values eg if Calvin has 3 horror it’s 3v3. — StyxTBeuford · 12621 5/1/20
I'd totally missed the ability section before. It was useful to read. — KakuRainbow · 35 5/17/20
I'm still not sure whether it works the way you've suggested however. And the only solution may be to ask FFG. — KakuRainbow · 35 5/17/20
ST.5 Determine investigator's modified skill value. Start with the base skill (of the skill that matches the type of test that is resolving) of the investigator performing this test, and apply all active modifiers, including the appropriate icons that have been committed to this test, effects of the chaos token(s) revealed, and all active card abilities that are modifying the investigator's skill value. The questions that arise are: What is 'base skill'? This is different to 'base value' in the rules reference Does the last part 'that are modifying the investigator's skill value' refer to just the object before it (active card abilities) or does it refer to all of the objects listed above? Milan Christophers +1 [Intellect] is a constant ability, but is this just saying that it's never not active for [Intellect] tests (as it doesn't have a during/while clause) From my understanding, a +1 [Intellect] is only ever of use during a skill test? I might be wrong, there isn't a card that says 'play only if you have 4 [Intellect] or more'? — KakuRainbow · 35 5/17/20
@KakuRainbow There is a very common circumstance where it matters outside of skill tests: Enemies with the Prey trait often specify the investigator with the highest or lowest of a stat. So it can be quite relevant. — Death by Chocolate · 1021 9/3/20
If a "skill value" was supposed to be an unmodified skill value outside of skill tests, Trial by Fire and the Red-Gloved Man wouldn't need to specify that they change the "base skill value". — Killbray · 1889 9/6/20