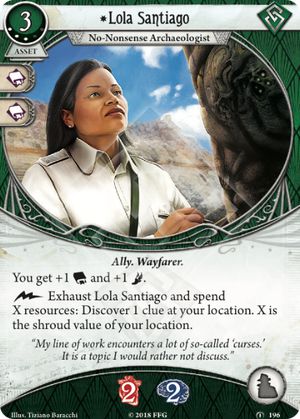 This quality card double, triple dips into as bunch of different card roles.

The biggest strength of Lola Santiago is not her incredible ability, it is her flexibility. Cards that on one hand help you gather clues and on the other help you deal with enemies are very rare, Lola Santiago's +1 can really help bridge the gap for when you can't quite (or don't want/need to) kill an enemy.

Lola Santiago's biggest weakness however is her high sustained cost, there is no way that you can play a dedicated monster killer, you just wont have the resources to fund weapons and combat utility cards like Machete+Physical Training. You can still deal with a few threats every scenario and if you hold off on using her special ability and lean on the raw +stats instead you can shift strategies to/from clue gathering and monster killing as needed.

With Preston’s Family Inheritance Lola lets Preston discover one clue per turn on a shroud 4 or lower (5 or lower if he’s a Lonewolf...) without taxing his resource pool.

In solo, where many locations are single clue locations, this lets Preston solidly hoover up clues while tooling up / drawing cards / moving around the map with his three actions.

Lola is better than Leo in a Preston solo deck. She also gives you a free action a turn, albeit limited to investigating, but that action is test-less, and one you’ll often want to do every turn anyway.

Finally, how does she compare to Streetwise? Sure, streetwise is far more flexible, as it lets Preston boost either Intellect or Agility to 7 once a turn by spending all of his Family Inheritance. Lola boosts those stats too, albeit only to 2, but at least it’s a permanent boost. I’d rather be investigating testlessly than pumping my Intellect via Streetwise and still risking drawing an Autofail.

Streetwise’s main strength is that it’s permanent, so you really have to buy it first. But once you have I’d save up your next 6XP for two copies of Lola

Especially when you add in her damage / horror soak which effectively puts Preston up to 8 in both.

I really believe Lola will become a contender for one of the strongest cards in the game. A guaranteed clue each turn is nuts. On top of that, it was confirmed that Flashlight can be used to lower shroud, and then in that window Lola can be triggered to make her ability 2 resources cheaper. Not that the cost is a huge challenge for someone like Jenny or Sefina, or even rogue in general now that we have 2xp versions of Hot Streak.

The +1 intellect and +1 agility are just gravy, and make you better at the things you want to be doing anyway, with the 2 intellect pips being the cherry on top. Fantastic.

gionazzo · 51
Yah, she looks terrific. — CaiusDrewart · 2403 8/22/18
Her stat boosts both help Lockpicks. Once the skeleton key (depths of youth, 5th mythos pack) is released her stat boost and abiltiy become even more useful/cheaper. At that point rogues can investigate any location and no need for lockpicks anymore. They can switch weapon to ornate bow. Use lucky cigarette case and backpack to search for the key. Too bad Wendy and Leo can't play her, as she costs 3 XP. — Django · 3554 8/23/18
Yeah, she'll definitely be super cool with the skeleton key, for sure. Not sure about the overall utility of the Ornate Bow, though. The action efficiency there is not very good. — CaiusDrewart · 2403 8/23/18
She also means that Finn no longer needs to fight the Seekers for Dr. Milan in a 3/4 player game. I think she's probably the first 6 points of XP for Finn, and maybe for many other Rogues too, depending on how vital Streetwise is to the build. — duke_loves_biscuits · 937 8/24/18
So I took AHLCG collection on a world cruise last summer. We made stopovers in Italy, Japan, Norway, and Greenland. When I got back, I realized a few cards were now missing. Which led me to the question: Where in the world is Lola Santiago? — crymoricus · 209 1/11/19
Skeleton Key + Lola Santiago + Burglary - reduce shroud to 1, pay 1 to get 1 clue, Burlary do investigate action 5int vs 1 shroud with Finn and get 3 resources :) You can milk any location this way as you will get clues yourself, with lola and have actions for other stuff — Killyox · 3 1/25/19