Return to The Boundary Beyond

Perform the setup as indicated in The Forgotten Age Campaign Guide, with the following exceptions:

(Continued on reverse side.)

Rückkehr zu: Das vergessene Zeitalter #38. Return to the Boundary Beyond #1. 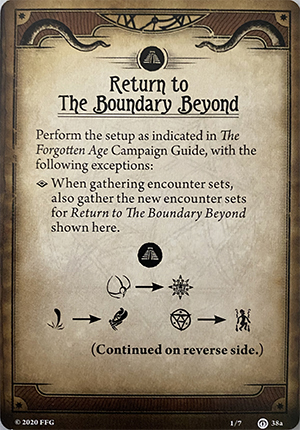 Return to The Boundary Beyond - Back

- Add the new Present-Day locations to the original locations from The Boundary Beyond encounter set. Remove 1 of the 2 copies of each of these locations from the game at random. Put the remaining locations into play.

- When building the exploration deck, use only the 12 single-sided Ancient locations. Do not include any of the other encounter cards listed in the original setup instructions. 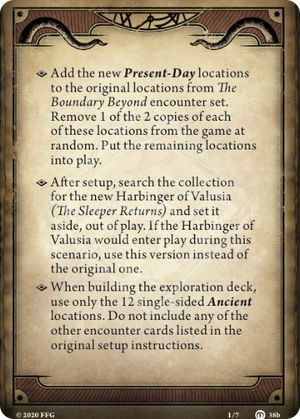 Sadly, Return to the Boundary Beyond, unlike Return to Threads of Fate, did not notably alter the scenario, leaving it almost as frustrating and confusing as it was before. There are some new "modern location" cards that vary the punishment you must inflict on yourself to explore, and the removal of the treachery cards from the Exploration Deck at least means you aren't paying for the right to be abused by treacheries, but this remains the low point in an otherwise lively and exciting campaign.

That sounds harsher than it is. AH:TCG is not a very complicated game (most of the complexity is involved in resolving specific card interactions), and the design crew at FFG deserves credit for regularly coming up with new twists on scenario design (and cramming them into fixed-size expansion packs). That this scenario is not as much giddy fun as its immediate predecessor (where half the pack was act cards; remember opening that?) is not a condemnation, just a disappointment. Interesting idea; frustrating execution, this "Return to..." eased the latter a bit.