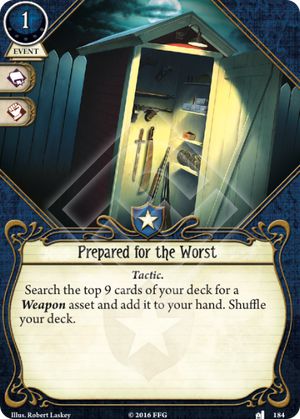 I'm am firmly in the camp that this card is a must-add to literally every deck, (ok, not Carolyn.) Tutors like this are just so efficient and smooth out clunkiness. It isn't a splashy or fun card, but you'd rather run this than a less apt weapon for your deck. Run 3 to 4 weapons and a playset of this card. Yes, you can run it with 3 weapons just fine, you'll hit a weapon a vast majority of the time and you're not building your deck fretting over 5% ~ 10% chances. It makes upgrading into better expensive weapons like Flamethrower better at every stage of the game. It helps you fetch any character-specific weapons. If you're playing at higher difficulties, it really is necessary.

LordHamshire · 23
Every Guardian deck? Even Carolyn? — StyxTBeuford · 1501 9/14/19
I’m not a big fan of this in a starting deck if I can just run 6 level 0 weapons. Certainly as you pour xp into weapons and ou want to increase your odds of getting your better weapons, it’s good, but the power difference of lvl 0 weapons isn’t enough to justify the extra resource and action to play this. Especially on Leo, Skids, and Jenny who can easily pick up a copy later in the campaign through Adaptable. Okay, the other two aren’t Guardians, but can certainly be played as them. — Death by Chocolate · 14 9/15/19
The fundamental question is whether the 3rd level 0 weapon is equal to or better than a machete or a .45. If yes, then this card is just a 1 resource tax. If not, then this card wins out (save for the fact that it is possible to completely wiff). I'm way behind on new tech, so I don't know if there's a third valid weapon option for most guardians. — Ergonomic Cat · 31 9/16/19
I strongly disagree that 3 weapons + 2 PftW is a good idea. That leaves you with a very high chance of PftW completely missing. The odds are NOT "5% or 10%." That is just untrue. They are actually about 30%. That's really high! — CaiusDrewart · 1770 9/16/19
Now, I do think this card has a good niche in the mid-to-late campaign, when you have 1-2 high-XP superweapons plus 3-4 backup weapons in your deck. PftW will then increase your odds of hitting your superweapon (not guaranteeing it, but still, it helps), while being very likely to hit something. It's nice on Stick to the Plan, too. — CaiusDrewart · 1770 9/16/19
But yeah, I agree with Death by Chocolate that this is actually a rather poor card in a level 0 deck. If you're playing without the Taboo list, the Machete is enough better than the other level 0 weapons which provides some reason to play this. But if you're playing with the list, running 6 level 0 weapons is a lot better even than 4 weapons + 2 PftW. Just drawing a weapon is better and more efficient than PftW -> playing a weapon, and just running 6 weapons also reduces the risk that you end up weaponless (because you don't have to deal with the possibility, however slim, of PftW missing.) That said, I could see including 1 in a level 0 deck, because it will become good later in the campaign. — CaiusDrewart · 1770 9/16/19
Well let's assume you hard mulligan for a weapon: You have about a 70% chance of getting one of your three weapons in that opening hand. So given that you land on that 30% and you have Prepared for the Worst on Stick to the Plan (the best place for it), then using it you have an 80% chance of drawing into your weapon (since SttP cuts your deck size by 3, so it bumps the odds here). So altogether with 3 weapons, Stick to the Plan, and a single copy of Prepared for the Worst, the chances of drawing your weapon within the first turn is .7 + .3(.8), or about 94%. So a single copy with SttP is good, but I wouldn't run SttP just for Prepared for the Worst. There has to be other tactics or supplies that you want, like Custom/Extra ammunition. And without SttP you shouldn't fall into the trap of hard mulligan-ing for Prepared for the Worst OR your weapons, because a 30% chance of whiffing while losing a resource, an action, and a card is too high risk. — StyxTBeuford · 1501 9/17/19
Yes, that's right. And the synergy is nice here, because Stick to the Plan + Prepared for the Worst + Extra Ammo + a high-XP weapon (preferably Flamethrower) all combine for a really nice, synergistic build. I just think this card is mediocre in a level 0 deck. Granted, if I'm planning on that aforementioned build, I will take a copy right away rather than spend 1 XP for one later. — CaiusDrewart · 1770 9/17/19
And in fairness it has two very relevant icons, so it’s not the worst lvl 0 card. — StyxTBeuford · 1501 9/17/19
Sure. I'd call it mediocre rather than bad in the early going, but then a very nice one-of in the later campaign once you have enough XP support. I do think that cutting two weapons from your starting deck and replacing them with two of these is a big trap, though. — CaiusDrewart · 1770 9/17/19
It’s also more than just a one resource tax - it also taxes an action which is a pretty big deal. As far as other viable level 0 weapons, Enchanted Blade is solid, and Survival Knife is a reasonable 3rd weapon. Leo can get away with rogue weapons, since he probably runs beat cops. Roland and Tommy have a signature gun. The .45 Thompson is usable too. Mark can get away with the .32 Colt. Tommy can also run Meat Cleaver. — Death by Chocolate · 14 9/17/19
4

I wanted to like this card. For a long time I used to run 2 copies of it in Guardian builds. Then, after a while, I started running only one copy of it (which is not something I normally do with cards) - and now I generally omit it altogether.

The reasons why I used to include this 2 copies of card at first:

Why I ultimately stopped including this card altogether:

Why I used one copy of this card for a little bit:

This card preys on weapon anxiety - the fear that you'll end up with no weapons when you really need them. I don't think this card is the answer to weapon anxiety, though - it's too expensive, too slow, and too unreliable to guarantee that you'll get the weapon you need. The only use I can think of for this card would be if you really want to use it to try and fish out a big gun - think Lightning Gun or Flamethrower - at a midway point through a campaign when you've already bought one copy of the big gun and don't have enough experience yet for a second copy. Even then, though, my advice would still be to simply use other weapons to keep yourself going until your big gun shows up.

Unless some other cards come out to make this more viable or desirable, I would say this card is probably worth passing on for the time being.

ArkhamInvestigator · 212
Until you have 2 or more superweapons (4-5xp each), this card is just worse than having another level 0 Weapon. To the point that I’m willing to spend 1 xp to buy a copy of this after I have them and Stick to the Plan. Ideally you are Leo Anderson and can just Adaptable them in. I ran the numbers and having one copy of this under SttP with two big weapons roughly improves your mulligan odds from 60% to 80% of getting the big weapon out on turn 1. With two level 0 back up weapons I almost never end the first turn without a weapon in hand or play. — Death by Chocolate · 14 2/27/19
Be aware that Stick to the Plan exhausts when used. So if you find a weapon with this card, you have to wait another turn to play Ever Vigilant and get it out. — Django · 2653 3/1/19
2

Edit: Updated for the times.

Prepared for the Worst, pretty good card, but only required in some pretty specific builds.

So, "tutor a weapon", really great for those times where you want a weapon in your hand, yeah? In deckbuilding Prepared for the Worst is largely interchangeable with weapons, card for card.

Here's the thing, if you want a gun in your hand. And fill your deck with guns, why bother with this thing? On one hand you play with so and so many guns and have this thing in your deck, spend an action and a resource (and card!) to fish for the gun, and THEN play the gun. Why not just, skip this damn thing, put 2 more guns in your deck, draw the gun straight from the start rather then bothering with this middle man?

So. For the explicit purpose of having a weapon, Prepared for the Worst is a hoop you just dont need to jump through anymore. There's a literal plethora of viable weapons now! .45 Automatic and .45 Thompson and Machete and Enchanted Blade and all the out of class stuff too! You can easily have a deck that's 50% weapons!

Bonus: It doesn't hurt that when Prepared for the Worst isn't needed for it's explicit purpose, you can chuck it at an investigate or fight action.

Tsuruki23 · 1081
I agree! And it's gets even better when you start upgrading to Xp-cost weapons. Need that single lightning gun in your deck This card will help you find it! <3 — olahren · 595 8/17/17
When you wanted to ensure you drew into a weapon early in game back in the core set days, one would stuff his/her deck with 6 weapons. Half of them made you cry when you actually drew them, since you dont want to draw that crappy knife, you want the Machete. With Prepared for the worst you get the stuff you want, be that with an extra action use and an extra resource cost. — Heyenzzz · 2743 8/18/17
Must-include with lightning gun or flamethrower build -- no way around it (unless you want to gimp your deck). — crymoricus · 202 1/2/19
1

Commenting because I don't see this point in the other reviews - I believe this there is great synergy between this card and Stick to the Plan SPECIFICALLY when you are also running 3 of Astounding Revelation. You get your first Astounding Revelation when you set up Stick to the Plan before the game even starts. You can have 1 copy of Prepared for the Worst in your deck and attach it to Stick to The Plan. Whenever you need to search for a weapon you have a decent chance of getting your second Astounding Revelation. By playing only one copy Prepared for the Worst and Sticking it to that Plan, you also avoid the dead draw of a PFTW when you don't need more weapons.

If it's your first play of the game you have a 60% chance of finding one of the two Astounding Revelations in your deck of 25 cards.

If it's your first play of the game and you have no weapon in your opening hand, you have the following probability of finding at least one weapon in the 9 card search:

gamwizrd1 · 2
I can’t say I’m super impressed by the second and third Astounding Revelation in here. What oh don’t account for is the ~30% chance at least one Surprised Rabbi will start in your hand, the guarantee that you will always have one dead copy unless you run more search effects, such as Tetsuo Mori. It also puts pressure on you to use PftW even if you have a weapon in hand at the start just to clear one out of your deck - in which case you’re really only getting 1 free resource from the second AS. Finally, the single Int pitch is pretty bad in most guardians, even the ones who can run it. Starting with 7 resources is generally enough to get a guardian rolling. I think there definitely could be a place for triple AS in Guardian IF they run more consistent deck searching, (run with Mr. Rook soon before he inevitably gets tabood this summer!), but generally I think you still only want one copy, even if you bring the PftW on SttP (which I think is a solid consistency choice in its own. — Death by Chocolate · 14 5/1/20