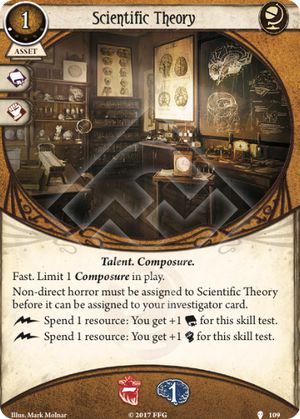 I was talking to a friend about potential upgrades to his Joe deck when, with a flash of insight, I remembered that this card exists. Aside from the obvious point that Scientific Theory boosts the two stats Joe uses to win the game, there are a few reasons it sits well in a Joe deck.

Composure cards can be protected from horror by assigning that horror to other assets with sanity values, like allies. Joe Diamond, with his low and unremarkable sanity, already benefits from multiple high-sanity companions. Charisma works well, as does a Miskatonic Army style of deck, which runs Calling in Favors and series of cheap allies with abilities that trigger after entering play -- all such allies have two sanity. They may not allow Scientific Theory to say in play forever, but they will let it last longer than it otherwise would.

It is worth noting that The Circle Undone gave us Mr. "Rook", a very powerful, disposable ally -- he only needs to stay around for three turns. Mr "Rook" improves any Miskatonic Army he enlists in. Though he lacks the Miskatonic trait making it more of a Mr "Tonic" Army.

Mr Diamond can pony up the resources to get use out of Scientific Theory. His cycle also gave us Crack the Case, which is one of the best level 0 economy cards, and he frequently spends an action playing an event for free. If you go without taboos you have access to Milan money (ideally with Charisma), and if you go with them Scientific Theory shoots up in value because its biggest competitor, Higher Education, is a harder sell.

First, this must be compared to Higher Education, as that gives you better pump rates for , Seeker's primary strength, and is a Permanent. If you take this, it's for the boosts.

So who wants this? Let's glance at the list:

But what about...Roland Banks! Sure...if he had any money. Maybe if you went with a clue-intensive Roland build with Dr. Milan and Scientific Theory. I think his Replacement cards from The Dirge of Reason would fit nicely into this deck. But Roland also gets by in low player counts by just picking up clues through his ability + cheats like Art Student and Working a Hunch.

The last thing I can think of is to use this in scenarios that want you to make checks for things other than clues - Where Doom Awaits and The Last King come to mind.

Overall, this card's time has not yet come. I expect we'll get a gator that has some fighting chops, and this will be a great include in that gator's deck.

PureFlight · 707
Acidic Ichor is a consideration here. Hitting with Acidic Ichor on Expert can be tricky (6 Combat is a great start, but not enough), and the card is rewarding enough that you might be willing to run other cards to support it. That said, I agree, this card doesn't have much appeal for most Seekers. — CaiusDrewart · 2668 9/17/18
It is also alright in a weird Carolyn build. But yeah, it is probably waiting for the Seeker fighter type. — Myriad · 1133 9/28/18
And Joe Diamond arrived. — Azriel · 1 2/21/19