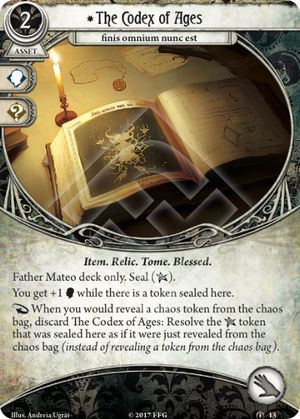 I think this card is pretty useful. Now, in multiplayer, taking away the Elder Sign from the group to give Father Mateo +1 Willpower is not the best idea. If Father Mateo is taking a lot of Will tests, it actually isn't that bad of an exchange in a 2-player game; but at higher player counts it does start to hurt the group. More importantly, removing the Elder Sign takes away fun from other investigators and will quickly make you the least popular player on the table. I don't recommend it!

But this card is still fine as a kind of janky Seal of the Elder Sign. Just wait until you need to Shrivelling V a high-fight enemy or Rite of Seeking IV a high-shroud location, or attempt some other similarly high-reward, high-difficulty test, plop down The Codex of Ages, and use it right away. The 1-action, 1-card, 2-resource cost of the The Codex of Ages is easily justified by the guaranteed success on a critical test, and of course Father Mateo's Elder Sign effect will make back some of that anyway. It's a strong play, and I wouldn't use The Codex of Ages for its icons unless I was desperate.

Obviously nice with a teammate's Double or Nothing for e.g. six clues from Rite of Seeking IV. That's a power move.

In solo I would think +1 Willpower would ordinarily be superior to having the Elder Sign in the bag, even considering how useful Father Mateo's Elder Sign is. So you probably want to just play the Codex in advance there, if you have time. This will also make it easier to use the Codex against enemies, something that would otherwise be tricky in solo (but less so in multiplayer).