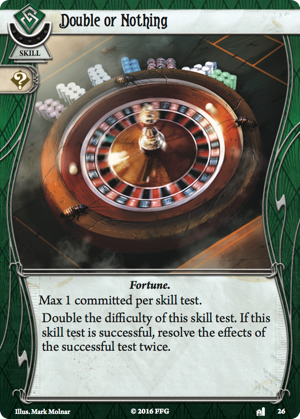 Double or nothing is now nothing. As the first forbidden card, the creators acknowledged that all the times you might want to use this it either blows up in your face or succeed so well it wrecks the scenario. Instead of designing around it for the rest of time, they’re telling you not to use it.

Which is fine; since core has come out, rogues have many, many ways to gamble. But the day is destroying a campaign and boss with one shotgun blast may be over. You might have to, tragedy of tragedies, use both barrels and even a spell!

MrGoldbee · 1303
I'm really not sure why the developers didn't just mutate it to say: "double 1 of the effects of the successful test twice". I guess that would make it less fun than it has been but there's nothing less fun than not being able to play the card at all. — LaRoix · 1607 11/5/20
Because even doubling one effect requires making sure that all future printed effects that work with Donut dont break the game. I am fully in support of the Donut ban- it’s a card that is not fun to play but is so egregiously powerful that you are forced to take it at any xp cost. Mutation is also a much less clean solution, as its not written on the card. — StyxTBeuford · 12739 11/5/20
Couldn’t agree more. Also since Winifred Habbamock came out it actually became so easy to build a deck that just endlessly loops with Quick Thinking and All In, which absolutely breaks scenarios. Try it out once if you feel like it, but it for sure makes the game kinda boring... :D — Scarx · 24 11/19/20
11

There's an obscure theorem that I feel I should bring to your attention:

For any card in Arkham Horror CG, if the card's combo potential with Double or Nothing is part of what makes it exciting, then that card is actually very boring.

Double or Nothing depends on being played with just the right card in just the right circumstances in order to accomplish anything. The effects of this card can certainly be spectacular, but spectacular does not win scenarios - utility, efficiency, and reliability do.

The real problem with Double or Nothing is that the "doubling" effect is mandatory when you use it.

Kill a 2 HP enemy in one action before you've drawn your weapon!

Gain 2 clues with one action at a low-shroud location (especially when combined with Flashlight, which can reduce the skill test requirement to 0, eliminating the doubling downside entirely)!

Add two clues for the price of one while Disrupting the Ritual!

Do 6 damage with a single attack using Backstab or the new Flaregun!

However, as with other circumstantial cards, the opportunity to use this effect won't always come up in a game, and you DO still need to pass the test. One the fun things about Netrunner is that even when a card can isn't immediately useful, you can often pitch it for the icons. Not so with this one. Too often have I found myself in a tight spot, staring longingly at the wild icon on this card, unable to use it without making things worse.

For the longest time I feel like this card never really hit its full potential because the game designers were afraid of printing something that would be too powerful with Double or Nothing. For example, I don't think it's a coincidence that the only 2-class combination that hasn't been used yet is Rogue/Seeker. The card combined with a Fingerprint Kit and a Deduction allows you to potentially scoop up 8 clues in one action, and with stuff like Higher Education boosting you it's not very difficult to pass the doubled test on any shroud location. Finn Edwards could pull a weaker version of this off, but he had to settle for level 0 Deduction and had to dedicate his limited off-class slots to it and he lacked the card draw that Seekers had. But now that Mandy Thompson exists, you get access to scooping 8 clues a turn and are able to piece that combo together very well due to her amazing card searching.

Additionally for the longest time using Double or Nothing on a big-deal combat attack sounded like a pipe dream because it was generally very difficult for you to be able to boost your combat high enough to be able to safely pass the doubled test, and many of the common Rogue weapons relied on you succeeding by 2 or more to have full effect. Now that Tony and his incredible 5 base combat exists though, that dream is a reality. Daring and Momentum both help as well, meaning that if you really want to go wild, you can throw in an All In to the test and get tons of cards out of the deal as well.

With those investigators and cards being printed, I don't think it's entirely surprising that Double or Nothing got nerfed on the optional Taboo list. Even without those cards, I've always felt like it was pretty good just because of its combo with Quick Thinking and "Watch this!", but now you can do far more than gain 2 actions and net 9 resources with the card. Even at 3 XP, I think the card is definitely worth considering in the right decks.

This card has really grown on me since play it in a few games of multiplayer. The key to it being that it doesn't just have to be your own skill check (unlike many Rogue cards). Especially nice when you have a Daisy Walker with Encyclopedia running around or one of the pump cards that a Rogue player would be keen to include.

Zail · 4
My favourite scenario on using this card: Mark Harrigan uses Shotgun + Vicious Blow 2 X2 + The Home Front + Double or Nothing + Seal of the Elder Sign/Eat Lead. That's 20 damage altogether and it reassurely hits!!! — matt88 · 2653 5/8/18
Does this have any effect on the new rogue card, Slip Away? Would it mean 2 upkeeps instead of 1? Thanks! — crymoricus · 225 1/12/19
I agree. The utility goes up significantly in multiplayer high-clue scenarios. It combos great with Deduction and/or Rite of Seeking for getting 4-6 clues in a single action. — micahwedemeyer · 54 4/25/19
1

With the Quick Thinking limited to once per round and Three Aces taboo'd to RFG, I think the ban on Donut could be revisited. The abusive edge cases are pretty much all gone at this point. Donuting Momentum or "Watch this!" is perfectly fine, as is committing it to an ally's check.

I think the game has room for some version of Double or Nothing in it. My humble proposal would be, at 0xp:

suika · 8767
In my opinion the taboo is justified. If I imagine a Rouge with lockpicks and an upgraded deduction on a two shroud location this means 4 clues. And with each commited skill card this combo gets much better. And if you are afraid of drawing a autofail you can play justify the means. — Tharzax · 1 10/4/21
Spending 6xp and 3 cards and adding 4 curses to get 6 clues once per game doesn't seem out of line to me for the 3 cards 6xp spent, considering that it's just a single action saved over investigating twice with Deduction (2). — suika · 8767 10/4/21
The issue with DoN is that on its own its a good card (double difficulty for a rogue deduction or a vicious blow without any combo's) its that plus the extra effects of making any card they design possibly broken if you double it, even if no card that currently exists was broken DoN needs to be out of the game to allow cards that would otherwise not ever be printed. Removing it from the game is just a limiter on breaking the game only once, which is a speedbump and still doesn't open design space. — Zerogrim · 260 10/4/21