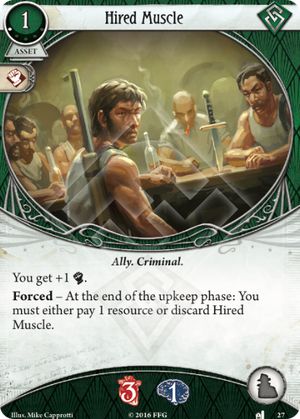 There are cards in this game that are so useful that you probably include them in nearly every deck you build. Then there are cards that are so hilariously bad that they'll collect dust in your binder until the end of time. Of course, there are also cards like Hired Muscle that are so nuanced that it's quite difficult to assign value without taking a much closer look. So let's do our due diligence with this boozy brawler and see what we can come up with.

On the other hand:

This last point is a real problem. Every investigator who can include Hired Muscle can also include Leo De Luca. If you're playing Leo (and why wouldn't you?), you don't want to have any other allies in your deck, as Leo really isn't expendable once he's on the board, so you'd never get to play those theoretical other allies anyway.

This would pretty much be the end of the conversation if it weren't for Charisma. But that card does exist so we can't wrap things up just yet.

At this point, I would like to say that I am not advocating purchasing Charisma just so you can add Hired Muscle to your deck. That would be quite irresponsible on my part. Instead, I think we need to examine Hired Muscle on a per-investigator basis to see if it has a place alongside other secondary allies.

One other subtle observation - if you plan on using Hired Muscle mainly as a cheap meatshield, it is worth pointing out that it performs better in scenarios with that have lots of enemies that don't deal horror such as spoiler and spoiler.

I think this card is not a practical option for most investigators, particularly the ones who also have access to Beat Cop.

However, I think that you can make the case that this card has some use in a Leo Anderson deck.

I think that Leo Anderson wants to hold Hired Muscle back and only play him at the start of a turn where he's going to fight. At that point, he can then play him for free (and without provoking attacks of opportunity) and benefit from the +1 for the duration of the turn. Hired Muscle also sticks around for the enemy damage phase, so he should be the first one to take hits, since he's expendable. The "pay to keep" option doesn't come around until the Upkeep phase, and during that time Leo can decide if he wants to pay one resource to retain the help.

It can be convenient to hold Hired Muscle in your hand to help combat Bought in Blood - Leo generally wants to play his allies quickly, but Hired Muscle is more of a combat trick, so if you discard him out of your hand, it's less painful than losing an ally you paid to bring out. If you have no allies in hand, you don't always have that option, so Hired Muscle mitigates that a little bit by living in your hand until you need him.

To the people that say he competes for the coveted ally slot, I would say: you are correct. However, Hired Muscle can take up one of Mitch Brown's 2 non-unique ally slots. Additionally, I would say that Charisma is almost mandatory for a good Leo Anderson deck, and so that should give you some more flexibility. I'm not saying you should get Charisma just for Hired Muscle - I think you should be getting Charisma because it's good for Leo Anderson in general.

Would I use Hired Muscle for any other investigator? Usually, no. For Leo Anderson, though, I can see this card being effective.

ArkhamInvestigator · 216
Leo also has access to Lone Wolf which helps offset this cards dramatic downside. — Difrakt · 746 10/2/18
I think this ally is a good option for a combat-focused Jenny (not as her only ally though). Her special ability basically pays for him. Haven't tried it but just saying. — matt88 · 1679 10/2/18
5

Inexpensive and accessible, Hired muscle seems like a bad card due to it's drip expense.

The funny thing is that hired muscle IS a bad card. Other cards exist that grant +1 to their respective ability and no other benefit except tanking capacity, the best comparison would be the Holy Rosary. So, a comparison of the two:

Holy rosary does not cost XP.

Holy rosary does not drain 1 resource every round.

So, the ultimate difference is that hired muscle has 1 disadvantage, the cost drip, and this disadvantage eliminates the cost advantage immediately at the end of a round and then keeps scaling negatively. The cool thing about slotted upgrades is that they stick around to give you their benefit for a long time, and are at the ready to provide the benefit even though it wont be needed for a few rounds. Hired muscle doesn't have this benefit, you by no means want it around round after round.

Hired muscle is the one slotted ability bonus that keeps costing you after you play it, Thus acting more like a resource pumping Talent like Hard Knocks then a lasting item bonus, and frankly speaking Hard knocks is much more likely to net you successes in the long run than Hired muscle. This means that Hired muscle´s only remaining ability is to soak damage, and even then the rampaging cost hardly justifies that either.

To mitigate Hired muscles cost you really want to get use out of it quickly. Play the card, knock some heads, then get it killed, but to get it killed you need to stick around and get hit by an enemy, an enemy that cards like Hired muscle would ideally help you get rid off (also, if you're TRYING to get the card killed then the health isn't much of a benefit.

At this point you've probably got the idea. Hired muscle is weak and counter-intuitive, ALSO you have to pay precious XP to slot it.

Don't ever bother with this card.