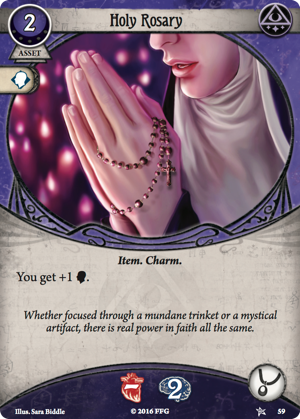 Given the ever-increasing card pool which can overwhelm new players, I thought it would be helpful to write a review of this core set card, which is mentioned in nearly every review for other accessories (and many non- accessories!). Those just starting out with their collection ought to understand how good this card still is, and why it's used as a standard against which all its challengers are measured.

First of all, new players need to understand just how valuable constant skill buffs are, even if they're just a +1. On a close skill test on Standard difficulty--say if you're 1 below, matching, or 1 above--a +1 can swing your chances by roughly 20-30%. Aim higher and the bonus gradually becomes less significant, but still provides safety until you hit the ceiling. 2 above is usually considered the sweet spot in Standard, and seasoned players will commit cards (or spend resources if they have a talent out) to hit it. Every time you make a test that you're getting a constant +1 buff to, that buff gains incremental value--one less card you have to throw away, or one less resource spent, to attain an optimal chance of success. It becomes even better when the bonus is unconditional, as it is for Holy Rosary (compare to Magnifying Glass, which gives you +1 , but only if you're doing a specific action).

And as far as constant unconditional buffs go, Holy Rosary is a bargain at 2 resources--not just because that's cheap compared to other buffing assets, but also because it has increased value in its home faction. If you've at least skimmed the card pool, you may have noticed a couple themes. First, their main stat is and they have a whole bunch of cards that allow them to use willpower for actions that would normally test other skills. And that's the main appeal of Mystics for many players: using only one stat and a handful of spells, you can do anything the other factions can do. So for a fully kitted Mystic, +1 is near equivalent to a +1 in everything.

The other theme you may have noticed is that Mystics like to take risks and make sacrifices in exchange for their power. While they tend to have high sanity, and high willpower to guard that sanity, you'll probably end up taking your fair share of horror [semi-]voluntarily using things like Shrivelling, Clairvoyance, Ward of Protection, Forbidden Knowledge, Agnes Baker's ability, or even Arcane Research. So that's where Holy Rosary's other effect comes in: having assets you can assign horror to is especially valuable in this faction. Mind the rosary will only be able to take 1 horror if you want to keep it in play, so you should only hit it for 2 if you're in danger of being defeated.

All that's really left to convince you of the value of this card is to see how some other accessories measure up. There are a lot, and there are only bound to be more, so I'll just stick with the other two level 0 accessories we have so far, as they're the most direct competitors.

St. Hubert's Key: Also boosts , has a somewhat complex sanity interaction that is essentially equal to +2 sanity, but is double the cost, and you have less control over when it's discarded. It's also unique, which usually won't matter unless someone else has a copy or you're wanting to double up with Relic Hunter for some reason (sorry, no -4 sanity for you).

Crystal Pendulum: Nearly identical, except instead of 2 sanity you have a chance to draw an extra card once per round. Getting the card draw requires math and luck, so it's a much more complex and much less consistent secondary property, unless you also have cards in your deck that manipulate the chaos bag, which lots of the newer Mystic cards can do.

Beyond that, I'll briefly say this: almost every other accessory a Mystic can take is fantastic, for specific deck archetypes or combos, while Holy Rosary is going to be good no matter what kind of Mystic deck you build. It's a cheap straightforward go-to for anyone who can take it.