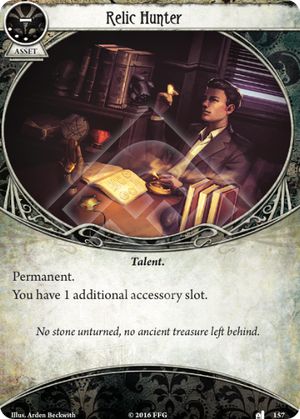 Compared to its cousin Charisma, this card doesn't really see much love, despite serving an essentially identical function. With that said, you should watch this space because as more and more must-have accessories are released, this card will only increase in value. I'm willing to bet that a year from now (or even sooner), we will start seeing this card being considered a lot more.

As things currently stand however, there just aren't enough high-powered Accessory cards to merit purchasing Relic Hunter for pretty much every investigator.

The one massive exception is Zoey Samaras. Her signature card, Zoey's Cross is an absolute must-play when you draw it. It's so powerful that you'll probably think twice before purchasing any other accessory cards, as they'll essentially just be used for their icons if the cross hits the table first. This is a huge shame, as not only would Zoey really like to pick up an Elder Sign Amulet at some point, but she is also the only investigator who has access to both Holy Rosary and Police Badge, arguably the two strongest accessories in the game right now.

But with Relic Hunter, Zoey can fill her deck with these accessory cards and get good use out of all of them. If Zoey's Cross is the card you never want to leave your side (e.g., the accessory equivalent of Leo De Luca, Dr. Milan Christopher), the others are all expendable and can be replaced once they've served their purpose (Art Student, Guard Dog, etc..)

bricklebrite · 67
I'll agree with that, except to say that it's also a good choice for Yorick, who can have Cherished Keepsake and Police Badge also. Those are good choices for him for surviving horror, or for that "one big turn". For bonus points, combine with "Will to survive" — AndyB · 402 1/22/18
With Key of Ys now out, Yorick is heavily eyeing this to have crazy Police Badge/Ys combos. — clydeiii · 6 3/27/18
Yorrick + 2x Cherished Keepsake — bits-in-a-ghoul-tummy · 30 6/14/18
I would definitely say that Key of Ys probably makes this card worth taking for some investigators — Zinjanthropus · 16 2/22/20
3

Hypothesis: Backpack is what's finally going to start pushing this card into relevance.

Analysis: There are two major issues with Relic Hunter that have always left it in the shadow of Charisma.

The first is that allies are just inherently more useful than most of the accessories. Holy Rosary sits alone atop it's throne for 0 XP accessories, whereas 0 XP allies includes powerful staples such as Dr. Milan Christopher, Peter Sylvestre, and even allies like Alyssa Graham or David Renfield that provide a flat stat boost along with a modest amount of damage/horror soak. Even Beat Cop (0) puts in big work, soaking one damage and one horror while providing the same +1 stat and while also having a useful sacrifice condition.

Those are just allies that provide at least one damage worth of soak and a +1 stat bonus too. That's not mentioning the more disposable ones like Art Student, Research Librarian, or even Arcane Initiate (0).

The second is that accessories haven't had quite the same support that allies have for a good while. Calling in Favors may not have been around for that long, but it's still a massive boon to Charisma decks. Again, even though we've had A Chance Encounter (both versions) for less time than Scavenging they're also just easier to use. The ally support also seems to consistently put the ally into play whereas item/accessory support doesn't.

Now however, we finally have Backpack. It doesn't dig as deep, nor does it put your accessories straight into play, but it does do something else important. It finds you multiple types of cards--and no, I don't just mean it finds you the types item and supply. It will help you dig up Flashlights, Lockpicks, or Magnifying Glasses so you can investigate, maybe help trigger that Scavenging easier? It can also help you dig up a weapon with which to defend yourself--and this is all in addition to helping dig for your accessories to put into play.

The only problem? We still don't quite have accessories on the same power level as we do allies. We don't have accessories with upgrade paths the way we do with allies. We don't even have anywhere close to the same pool of unique cards to choose from that aren't signature cards. There are only three accessories that offer any amount of horror soaking, and one of them costs a fair bit of XP. None of them offer damage soaking, which admittedly is fair from a flavour perspective (that's what body slot items should do). Even with how nuts Key of Ys is when powered up, you still defend it with allies. That card isn't that unfair compared to The Red-Gloved Man given the support that it has from the rest of the card pool.

Conclusion: We have the support we need for accessories in cards like Charles Ross, Esq., Backpack, Relic Hunter, and Scavenging. What we lack are the accessories that are worth supporting with these cards. Until that changes, accessories will be relegated to set and forget all-stars like Rabbit's Foot and Holy Rosary, with brief appearances from Cherished Keepsake or Elder Sign Amulet to help patch up the sanity of investigators vulnerable to horror.

Swekyde · 38
I have to agree with this assessment. I've seen many decks that have used Charisma. But nobody that I've played this game with has ever been tempted to buy Relic Hunter. — cb42 · 23 11/26/18
I'd add that St. Hubert's Key heals horror when it pops, so it is a bit of a 'last ditch' soak. Personally, I have used Relic Hunter, in both Yorick (Keepsake and Police Badge) and Jim (Jewel, St. Huberts Key and, hopefully soon, Crystalline Elder Sign). But I agree, we're a bit short on accessory upgrade paths. — AndyB · 402 11/27/18
I’m a little surprised to see a recent review of Relic Hunter with no mention of St. Hubert’s Key. I’ve found it on par with level 0 unique allies. I’d be happy to in it alongside Key of Ys on Pete or alongside Disk of Itzamna on Daisy. — Death by Chocolate · 14 11/27/18
My reason to pass more on St. Hubert's Key really is because investigators that care about both of the stats it boosts are few and far between (Jim, Daisy, and Carolyn -- others who can take it only consider it as copies 3-4 of Holy Rosary). Also, while it does heal some horror when it goes the fact it reduces your max Sanity at the same time means it's a lot more clumsy than Holy Rosary. You can't even get the boosts from St. Hubert's Key if you're already at 2 under your max. I played a Carcosa campaign as Sefina where I used Relic Hunter for Holy Rosary and SHK (which was later replaced by Key of Ys) and I almost always felt better about playing Holy Rosary than SHK. Maybe I'm just biased from having my Keys pop on me at inopportune times, leaving me short crucial Willpower when a Holy Rosary would not have done the same. — Swekyde · 38 12/7/18
Key + Crystaline? Seems worth to me. — crymoricus · 196 1/7/19