Evade. Automatically evade a non-Elite enemy at your location.

When you play Decoy, increase its cost by 2: Change "at your location" to "at a location up to 2 connections away." 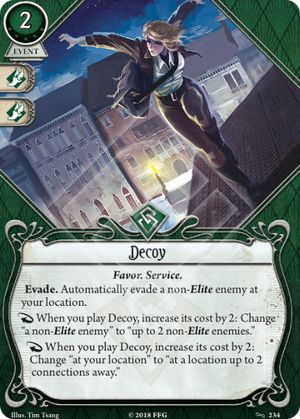 From the suit of favor cards (Decoy, Intel Report and Small Favor) Decoy is a relative step down from Intel Report.

Evading is not a typical issue for a , so that's already unfavourable, it also will not affect elites unlike Cunning Distraction. Finally, because the Evade text is Bolded it will not provoke attacks. So, a breakdown:

Not affecting elites and being printed in the specialised faction are negative points to this card, it's still good for Preston Fairmont and very helpful in multiplayer.

Tsuruki23 · 948
Good for anyone with access to Rogue cards but with bad evade. Jenny likes it since her evade isn't special, Preston likes ti because he's Preston, and Leo obviously likes it with his 1 Agility, though it competes against other mobility cards like Think on Your Feet and Elusive. — StyxTBeuford · 976 7/11/19
Also, Rogues are getting an investigator with low agility next expansion with Tony Morgan. Granted, he’d rather kill than evade, but as part of a supportive toolkit, it’s something to consider. — Death by Chocolate · 13 7/11/19