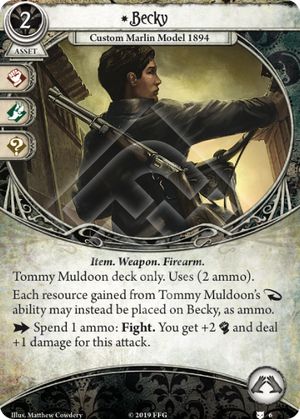 This card is incredibly powerful in so many ways. Normally, 2-handed weapons, and especially Firearms, are difficult to use because they are either:

Becky solves both of these problems, and opens up an entire strategy based around having a super powered up Firearm that never runs out of ammo.

At 0 XP, cards like Warning Shot suddenly look quite attractive since you can easily afford to spend ammo on it. And you can play Upgrade cards like Reliable and Custom Ammunition and they will remain relevant for the entire scenario, effectively giving you a permanent +1 or +1 damage against Monster enemies.

Tommy Muldoon can easily keep Becky full of ammo by using cheap soak Assets like Leather Coat, Cherished Keepsake, Guard Dog, and later Brother Xavier, Bulletproof Vest, Elder Sign Amulet, plus any number of Story assets which are typically Allies. As an added bonus, these assets do not get discarded, but shuffled back into your deck, so you can keep drawing and re-playing them over and over again to keep reloading Becky.

It also has icons so it's a great target for Well Prepared giving either +2 or +1.

Just about the only downside this card has, is that if you fail to find it in your opening hand or after using Prepared for the Worst, and it somehow gets discarded from your deck, hand, or play area - there is no easy way to recover it.

Faranim · 333
I think this card is very nice to have in the early campaign (well, if you're fortunate enough to draw it.) My problem is that it gets outclassed in the later campaign, because doing 2 damage per action in the late campaign is just not where I want to be as a Guardian. At that point, I'd much prefer the XP cards that do 3 or more. — CaiusDrewart · 2699 10/3/19
Custom Ammo is a good suggestion there, of course--but that card would look even stronger on some of the XP weapons. — CaiusDrewart · 2699 10/3/19
While it can save you 10xp on a pair of heavy weapon cards, you definitely want the double Prepared for the Worst, and to puppy dog eye your seeker buddy to invest 10 in double No Stone Unturned 5 for reliability. The Mk1 Grenades do make a great back up weapon, as they don’t compete for slots, and are as good (or better) than a flamethrower against multiple targets in a space, and make your PftW’s much less likely to whiff. Plus they’re easy to load up with ecache3, and if you’re running tabky cards like, Bro X, Dem Boyz, or the talent nobody uses, you can even protect your allies from the splash. — Death by Chocolate · 1137 10/4/19
I think looking at this card as the main feature of Tommy- as something worth using Prepared for the Worst for- is probably not optimal. At its absolute worst it's 2 shots at +2 combat and +1 damage for a meager 2 resources. If you get it early it keeps you in the game until you grab a better gun, and if you grab it late it can more easily keep resources on itself as your deck will be more diluted and full of soaks (if you've been using them and you don't have too many of them discarded to Rookie Mistake). I think you still take 4 or 5 weapons alongside it, and Tommy has a pretty solid array to choose from. Any charge/ammo based weapon like Thompson, Enchanted Blade, or .45 Automatic can be thrown with Act of Desperation, which to me is one of the strongest cards he can take. Relying only on Becky hurts consistency and power in my view. — StyxTBeuford · 12711 10/8/19
As of A Thousand Shapes of Horror, that downside doesn't exist either; Tetsuo Mori (a must-have Tommy card in any case) can not only help you find it, but also recover it from the discard. That said, there are two downsides I see. One is that it Venturer works well with Tommy for big guns, not that well for this. (Though there's always Grenades, which don't take a hand slot). The other is that guardian assets, especially the ones that Tommy likes to run, are expensive, so he'll be more strapped for cash if he's spending a lot of money on Becky than if he just uses a machete. — Yitzi · 1 6/29/20
why doesn't Venturer work well for this gun? — Krysmopompas · 287 6/5/21
Venturer works ok with this gun, but reloading Becky bullets just isn't as impressive as reloading a Flamethrower or Lightning Gun. — Soul_Turtle · 1 6/30/21
0

One of my favorite Signature cards in the game.

This card is basically A better version of the .45 Automatic, In fact I would say you shouldn't even get the 45. Automatic. Lets Discuss

What this card does better: Cost 2 resources less Gets an additional fist And the reason this is one of the best signature cards, It essentially has infinite ammo.

The only 2 down sides of this card is the ammo capacity and that it uses 2 hand slots, But even the ladder can be solved with Bandolier which goes well with Tommy's ability. Even if you have a better weapon in your hand slot this card also has pretty good resources.

Back to the ammo discussion, You can draw this card at this start of the game and use it all game reliably without worrying about ammo. So, in summary I think this card is one of the best weapons in the game.