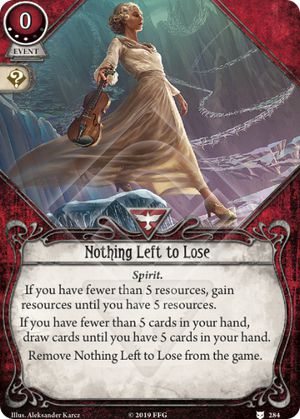 This card is extremely strong. It's not quite drawing thin bananas, but it is very powerful econ. You don't have to try very hard to get 3-4 cards and resources from this. I almost always buy one of these within the first two scenarios, it just makes the rest of my deck run so much more smoothly.

dubcity566 · 70
10 actions in one (at best) is pretty strong. It's got a great niche in dark horse decks too, especially if you haven't drawn dark horse yet or if you need to play out a few assets. — SGPrometheus · 635 11/19/20
My problem with it is that it feels like a 3XP Take Heart that removes itself from the game (a big deal in a class that recurs stuff so easily). I've not been terribly impressed with it. Maybe now it'll have a bit more use with Mariner's Compass as the investigating equivalent to Fire Axe, so you can more reliably be at low resources, but I often find my Survivors are well over 5 cards in hand even at level 0. I think for the same XP cost, it's a lot more appealing to take Drawing Thin. — StyxTBeuford · 12690 11/19/20
Add cornered for laughs. — MrGoldbee · 1220 11/20/20
Or add Cornered because it is very strong. — Death by Chocolate · 1105 11/22/20
Oh wow I’ve been playing this card hella wrong, I thought you were supposed to choose either option like drawing cards or gather resources didn’t realize you had to do both! — Elecyan · 1 4/5/21
3

Rules question about "draw cards until you have 5 cards in your hand". Do i resolve weaknesses that don't stay in my hand and keep drawing until i actually have 5 in hand? Or do i have to wait with resolving weaknesses until i've drawn up to 5?

Django · 4108
I believe cards are always drawn one at a time, so I think you would draw the weakness, resolve it, then continue drawing up to 5. — SGPrometheus · 635 3/15/20
Card are not always drawn one at a time- Patrice's investigator ability draws 5 at once. In fact, regarding NLTL, I'm 99% certain it chooses a number of cards you draw based on the difference (5 minus handsize) and you draw them simultaneously. So you would draw up to 5 (NLTL resolves) and then you resolve all weaknesses. In other words, if you get a weakness that discards after it resolves, you end up with a hand of less than 5 cards. — StyxTBeuford · 12690 3/15/20
On a related note. I recently began my first run through of a campaign with Patrice and the basic weakness I drew was Insomnia. The first time I drew it was as the second of the 5 cards I had to draw in that upkeep phase. The way I interpreted this was that it meant I had to discard all but one card from my hand, but since there was only one card in hand at the time it completely whiffed and I then got to continue drawing up to 5 cards. This felt a LOT like cheating, but it did also seem the most logical interpretation of how to resolve the effect. Do we have any more experienced Patrice players who can confirm whether I cheated or not ? — Sassenach · 158 3/15/20
You resolved it incorrectly. You draw 5 simultaneously. Then, you discard to 1 due to Insomnia. The golden rule of this game is you resolve all effects in full before resolving anything else, and Patrice's ability is included here. — StyxTBeuford · 12690 3/15/20
Correction: *Amnesia, not Insomnia. — StyxTBeuford · 12690 3/15/20
Ah yes, Amnesia. Forgot about that one... ;) This does seem like a fairer interpretation, I'll do it that way in future. Still a pretty benign weakness for Patrice of course. — Sassenach · 158 3/16/20
I would say that "one at a time" is implicit. Revelation effects immediately when you draw a weakness, so you would never count that card on your hand. FFG should errata this card to make it clear how to understand it. — haakenlid · 1 11/26/20
Patrice's investigator card has the exact same wording as this one, and Patrice draws cards simultaneously as confirmed by the devs. It's bad wording and unintuitive, but it is what it is. — flamebreak · 19 2/17/21
2

Despite surface similarities (both give cards and resources), Nothing Left to Lose serves a very different purpose from Drawing Thin.

Drawing Thin is sustained economy. It's for a deck that constantly spending resources for expensive events or asset recursion. It takes an install cost and actions to trigger its effects. Track Shoes can make it actionless at times, but there's the install cost of Track shoes to consider as well and you need to find both cards and play them. In exchange for an early tempo loss, you get a steady flow of cards and resources every round to fuel your expensive cards.

Nothing Left to Lose is the premier burst economy card. It's for a deck that needs some money to play out its starting assets, then no longer needs more resources, either because the deck is cheap or the assets will provide enough economy. Dark Horse builds are the archetypal example, but it's by no mean limited to Dark Horse builds. For example a Yorick build recurring Rite of Sanctification once set up no longer needs sustain economy from Drawing Thin. All he needs is the starting economy and cards to set up in the first place. In such decks, Nothing Left to Lose will outperform Drawing Thin in set-up tempo and in deck consistency.

The remove from game effect is actually beneficial, since you should only need to play this once per copy in your deck. If you find yourself cycling your deck and still need to play Nothing Left to Lose, you probably should have taken Drawing Thin instead.

It's also an auto-include when when you get Paranoia or Amnesia or Tower as your random basic weakness. Also as existing reviews point out, there's no need to wait to get full value out of it: gaining 5 resources is already better than Emergency Cache (3) even if you're not drawing any cards, as long as you can put the resources to good use.

suika · 8471
In Patrice's deck, I'd also highlight the importance of a question skill icon. This means that if you get this card but don't need resources (or lack actions), you can commit this card to any test effectively. If you're running grisly totem, as Patrice decks sometimes do, that's two question marks. I've found cards without skill icons to be very risky in a Patrice deck, especially if you're doing a Cornered / Grisly Totem build. For her, this is definitely superior than having an iconless emergency cache (3) cycling. — Achire · 211 5/20/21