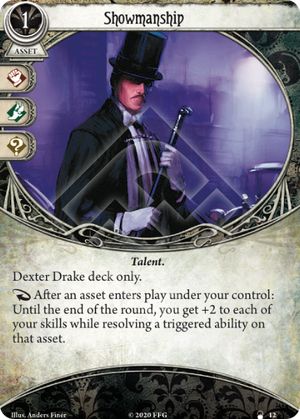 As noted, it's great, and it doubles down on what Dexter wants to be doing every round- putting assets into play. Bursty guns & swords become very appealing, giving Dex something to do with his hands.

The problem, as with many signatures, is reliability. You can't really plan on it showing up, as to my knowledge, Dexter has no native way to tutor it... except for ... his OTHER signature option.

Intentional? Encouraging "Not only are you allowed to use both sets of signatures on an investigator: in this case, you should!"?

...eh, likely not. Sure, this is a nice card- and so is Molly- and Molly herself CAN be tutored with limited reliability- but Renfield Probably -> Calling In Favors -> Molly -> Showmanship seems like a long road that's interesting but inefficient.

Something of a tangent: it really feels like taking an additional sig + weakness is a trap. For 1 card, you're thickening your deck AND adding an additional weakness you didn't have to take, and even mild weaknesses like Dexter's are a major tempo loss at best. If you think about it, many would leap at the reliability of forfeiting their sig in exchange for losing the accompanying weakness. Not just the Rolands & Mandys of the world who's bad decisions are so strong you have to build your deck around them. (In fairness, this is sometimes to balance the char's inherent skills- this seems the case with Mandy's weakness.) An optional card has to pull a LOT of weight to be worth "Add a weakness to your deck".

Back to Showmanship itself, it's fine. Either it or Molly are solid; Molly adds consistency, Showmanship leaves your Ally slot open for more asset-cycling. I like the limited-synergy they have together. It would be neat to see this go further on a future 'gator who had replacement sigs explicitly designed to make the option of taking ALL sigs at once a genuine temptation.

Comparing this with the "book" signature asset, Molly Maxwell, it's hard to say which one is better, since they do such different things. This is a nice example of a card tailored toward its investigator. It's cheap and adds a valuable boost to what Dexter wants to do -- put Assets into play, use them and then discard them. He can drop a Flashlight at the very start of his turn, assuming he has another Asset to discard, investigate 3 times with an effective 4 and -2 shroud, then start the next turn playing a .41 Derringer to blast away with 7 against an enemy who popped up during the Mythos Phase. It's not flashy, but it's better than it looks at first glance (which is pretty thematic for a magician).

Since it really has no competition with the "book" signature, Dexter is pretty well placed to take both.

I'm wondering: is it possible to double up on this card's bonus and get +4 to all skills for one or more tests?

There's no limit on Showmanship's ability, so if you put multiple assets into play in the same round, you can apply the +2 bonus to each. But under normal circumstances you won't be "resolving a triggered ability" on more than one asset at a time.

Granted, this is a lot of effort to go to for an extra +2 on a single test, but maybe there are other ways of accomplishing the same thing that I haven't thought of. The best I could come up with was to use De Vermis Mysteriis to play Knowledge is Power (via Versatile) and activate Shrivelling as above ... but that's even more effort for the same minor benefit.

RhialtoTheMarvellous · 5
I think +2 is the maximum benefit. In this case, the resolution of Haste's triggered ability is to get the opportunity for a third action of a type, not to take that action, so there is no test to get a bonus on. So you would 1. Play Haste, 2. (probably) Use Dexter's reaction ability to overwrite something with Shrivelling, 3. Shrivel at +2, 4. Shrivel at +2, 5. reaction trigger Haste to get a 3rd activate action. 6. Shrivel at +2. trigger — LivefromBenefitSt · 843 10/22/20
Not sure what that rogue "trigger quote is doing at the end there — LivefromBenefitSt · 843 10/22/20
Hmm, I'm not so sure. Haste's effect is "Take another action [right now]", not "You may take an additional action [during this turn]". — RhialtoTheMarvellous · 5 10/22/20
Ah! Haste states that you take another action of that type. Since you aren't resolving a triggered ability on haste with this action, but rather resolving a triggered ability on shrivelling. You get the +2 for shrivelling but no more. — ironbrw · 9 11/10/20
Haste's reaction is itself a triggered ability, though: https://arkhamdb.com/rules#Abilities_Triggered "A triggered ability is any ability prefaced by either a <span class="icon-free" /> icon, a <span class="icon-reaction"></span> icon, or an <span class="icon-action"></span> icon." — RhialtoTheMarvellous · 5 11/10/20
Err, pardon my failed HTML ... — RhialtoTheMarvellous · 5 11/10/20