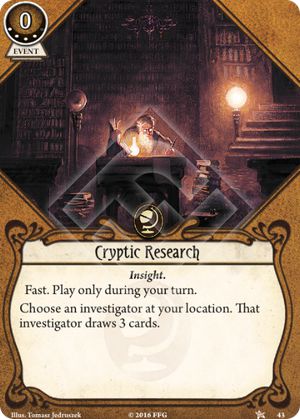 For its XP cost, i can consider this a very good card...but not great. And the only reason I downgraded it to very good is because it has no icons. For a 4xp card, i think it should have had two icons in there. I base this on several playthroughs with Rex where in the mid-late game, i am usually swimming with cards.

majer3raistlin · 22
But it's fast and replaces itself... you could just play it and get some new icons on the new cards if you wanted to. I do agree there is a problem with the XP cost though - 4 XP is very pricey for a value card, eg, compared to impact cards like Acidic Ichor, Higher Education, Deciphered Reality etc, that will have more of a big boom when they land. — duke_loves_biscuits · 896 7/31/18
It’s 3 cards for no actions and not-insignificant deck thinning. There’s no way this could be less than 4xp even using the very basic logic that 1 card = 1xp — Difrakt · 1000 8/1/18
Yeah, plus why on earth would you ever play Cryptic Research for icons, even if you could? Just play this card for its effect, and then you have three more cards in-hand, with all of their icons now at your disposal. — sfarmstrong · 240 8/2/18
If you don't need it for yourself, just play it for someone else!! — matt88 · 2213 8/5/18
Compared to Stand Together, it does seem expensive XP wise (it's arguably slightly worse, and one XP more). That might just be because Stand Together is totally amazing though. — duke_loves_biscuits · 896 8/15/18
19

If you are wondering how strong this card is, just imagine that it says for no resources and no actions, an investigator at your location draws 10% of their deck. Yeah, I'd say that is pretty good.

Currently, only 6 investigators can take this (every Seeker except Norman). Among them, the hardest thing about taking Cryptic Research is choosing to prioritize this. 4XP is a lot of XP to spend on a card and Seekers have a lot of places they could be spending their XP. Add to that the fact that Seekers have a lot of card draw even with no XP at all. It's truly not hard to draw through your entire deck with Seeker, even with no XP at all. If you are worried about redundancy, then think of it this way: Cryptic Research could help you consolidate some card drawing power into one card, leaving you more space to add other effects.

However, don't neglect the multiplayer possibilities. There are other factions that have a hell of a time drawing cards, Guardians in particular. If you are doing a classic Seeker + Guardian multiplayer campaign, this can help your Guardian draw through their deck to get cards they need, while you draw through your own deck with your own tools.

Soloclue · 2030
But here’s a different way of looking at this card: you’re paying 2xp per card draw for two free card draws (the third card draw merely replaces the drawing of this card) which is not a terribly strong card for lvl 4. There are fringe benefits but for anything other than giving your allies some card draw there are generally better options (Glimpse the Unthinkable, No Stone Unturned etc) — Difrakt · 1000 2/28/20
I think the multiplayer support aspect shouldn't be overlooked. I think it's fair to compare it to NSU 5, and unless you're Mandy Thompson there's a fair debate as to which is more worthwhile. — StyxTBeuford · 12435 2/28/20
NSU 5 is a *very* pale comparison though. It's hard to overstate exactly how much more powerful an unrestricted tutor is than a few card draws. NSU 5 is a copy of the most useful card, in any deck at your location, right now. CR is a random 3 cards, no guarantee that any of them will be useful at all. There's a reason that Mandy is considered one of the most powerful investigators at the moment and for similar reasons NSU 5 isin pretty much every situation better than CR 4. — Difrakt · 1000 2/28/20
I still think it depends. For someone like Roland Banks, getting a weapon they can't find right now is a big deal. For someone like Silas or Minh though? So many of their cards are cantrips anyway and do more or less the same thing, and we do have more cards now that synergize with keeping your hand size large. I think most of the time NSU 5 is probably better, but I think it's closer than you realize. 3 cards deep, especially if their deck is already thin, is likely to either get you the same card NSU 5 would've gotten you or at least several options that are possibly close to it. In a game like MTG where card draw is rare and the decks are twice the size, tutors are massively powerful. In Arkham, people cycle their decks all the time and it's not even weird to see it happen multiple times a scenario. — StyxTBeuford · 12435 2/29/20
2

This is a really powerful card. Compared to Preposterous Sketches,its 4xp more. So you can easily consider these two cards are upgraded version to another. For 4xps you get: Fast Two cost lower No need to be in a place with clues Can be another one

How can you complain this card? For 4xps, it’s a fair trade.

Especially in Minh Thi Phan,you can effectively draw more icons to help others.