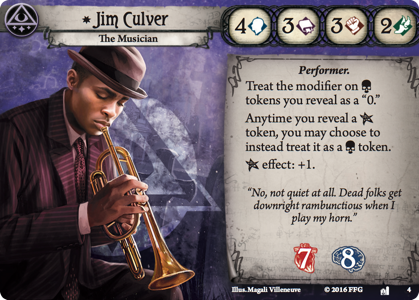 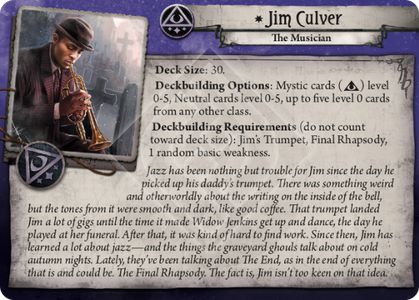 One of my favorite Investigators, if a bit of a sleeper compared to other Mystic investigators.

While Jim Culver has the basics of a good Mystic Investigator, he does not have the longevity of his spells like Akachi or the Sheer Willpower and low health enemy removal as Agnes. Nor does he have the potential of controlling Doom and using it to his benefit like Marie Lambeau. However, how he plays is something more subtle, with the ability to use the Skull token at a constant "0" value in most scenarios. This ability it still pretty powerful for balancing the Chaos Bag in your favor. (Note though you will still have to deal with the effects of what the skull token brings for scenario and even on player cards).

Being a Dunwich investigator as well, he has access up to five out-of-class level 0 cards. This means you have a bit of flexibility of building out Jim how you see fit. This makes him very good in terms of playing him as a strong solo investigator but also an investigator that can slot in well in multiplayer as a support character. And one other benefit is that he has one more health compared to Agnes and Akachi, which does make him more survivable.

A downside to the jazz player is his low agility and having one less willpower compared to Agnes and Akachi. However this is made up with Mystics having ways to buff their already amazing willpower and spells that cover their stats. And while his Intellect and Fight is at three, he is still going to struggle with hardier enemies and high shroud locations without the spells.

If you are looking for an investigator who is provides an interesting challenge to deckbuilding but has a large degree of both reliability and versatility, Jim Culver is your main man.

Jim is frequently under-estimated, and for two main reasons:

The single most important thing to know about Jim is that the particulars about his character make Grotesque Statue super powerful. There are 3 key reasons for this:

Once Jim gets a statue, he is essentially (invincible) [arkhamdb.com

FBones · 13498
"Now, with Uncage the Soul, this is less important."...could you explain this statement a bit? — KillerShrike · 1 1/25/18
KillerShrike: If I may speak for FBones, I think he's suggesting that triggering Jewel of Aureolus was previously really important for the sake of Jim's economy, but now that Uncage the Soul exists, Jim's economy doesn't need the help as much. — CaiusDrewart · 2497 1/28/18
I think the suggested Grotesque Statue + Scavenging build is super clever, but it's also slow and XP-intensive. Other investigators can be more effective at less expense. Overall I can't say that Jim's special ability is good. Compared to what other investigators get, getting better results (often only slightly better) on 2 or 3 tokens is not much. — CaiusDrewart · 2497 1/28/18
3

Jim’s weakness, Final Rhapsody, used to be a rough setback. Now, with the Innsmouth Conspiracy, you can mitigate it. Fill the bag with blessings and curses, draw five tokens, and take much less damage than before.

There’s not much else to say, except that Jim’s Trumpet scales well with more players. More players means more tokens, with four people out it’s likely that you’ll trigger every turn, especially if you bring Olive McBride on the road.

I've just recently started a 2 gator playthrough of Cirle Undone with Jim. I'll have a deck list to come soon but at the moment it has gone well using the sealing cards as well as Defiance to mitigate the bag in Jim's favor. Most every test so far as long as I can at least match the test value has gone my way. I feel like sealing mechanic may have jumped up Jim's power level by quite a bit.