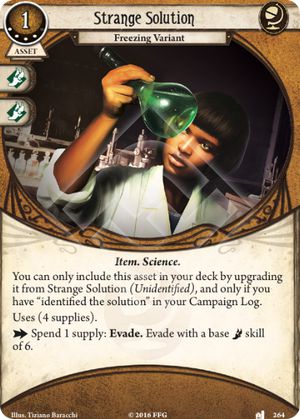 If this were the only choice for upgrading Strange Solution, I would rarely, if ever, use it. But given the availability of Strange Solution, no one in their right mind should ever choose this. 4 evades versus 3 attacks with +2 damage each? Evading is generally only better than attacking when the enemy is not hunter and you can do what you need to do and leave the location the same turn. This card should have had at least 6 supplies to be in the same ballpark as Acidic Ichor.

jmmeye3 · 539
Evasion version of archaic glyphs is so much better if you don't need the arcane slot. Your INT will be higher than 6, easier to boost, you get a clue and you're much more flexible what you evade. You could help you fighter so he can kill a cultist with the final doom. — Django · 3558 7/16/20
I think this card was a pretty big miss. Acidic Ichor is a test at 6 with +2 action economy of upside, while this has... no bonus effect. Maybe if this had ‘If successful, they don’t refresh this round.” would give it enough value to be viable and play into the flavor of a freezing solution IMO. At least the healing one (the other 4 supply option) gets 2 units of value with its healing, and the Econ (with 3 supply) gives 3 units of value. — Death by Chocolate · 790 7/16/20
I could see playing this with Joe Diamond if I were ever silly enough to play him in TFA. He would be able to take care of some enemies but would need to be able to evade some during the campaign. But Django is right that Archaic Glyphs is much better since it is untested. — TWWaterfalls · 735 7/20/20
There is one reason that you might consider Strange Solution over Archaic Glyphs and that is the synergy with Supply cards like Fingerprint Kit. You can add ECache or Venturer if you are Joe to reload either one. — TWWaterfalls · 735 7/21/20