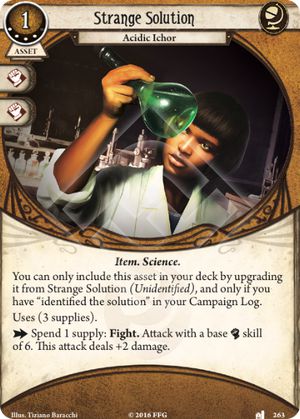 With the Acidic Ichor variant (see above) of the Strange Solution, seekers gain an awesome weapon. Strength is a problem for all the current seekers, and having your base increased to 6 is great - and combined with +2 damage, it becomes awesome. On top of that, it's cheap, and it doesn't take a hand slot.

In a recent campaign I equipped Rex with 2 of these as early as I could - they do need a lot of XP - and he was a better fighter than Jenny through much of the rest of the campaign.

To be honest, I think that combat beats evasion (kill it and it goes away) and healing (kill it and it won't hurt you) , so I can't see why you'd use either of the other Strange Solutions.

AndyB · 400
WHY do some cards discard themself when out of supplies and others don’t? I really want this card to be scavengeable, and I don’t get the inconsistency. Is it a way to nerf strong cards? Or was there just not enough space on this card for another line of text? — Runic · 1 1/22/19
16

This card seems incredible at first glance. And it really is.

+2 damage is a dominant effect in this game, and cards that offer repeatable +2 damage are almost always outstanding. (Springfield M1903 is why I had to say "almost".) Compared to the other +2 damage weapons in the game, Acidic Ichor is way cheaper and more convenient. Think of Lightning Gun; Acidic Ichor is cheaper by 1 XP, 5 resources, and 2 hand slots. That's amazing. It's kind of bizarre that the faction that's the best at finding clues would get a combat card as sweet as this, but that's how it is.

Yes, you need to identify the solution. But that basically boils down to spending a couple actions and passing an Intellect (4) test. Even on high levels, that's not much hassle.

As icing on the cake, Emergency Cache III is a quite efficient (albeit XP-intensive) way to reload this card.

So what's the catch?

Well, on lower levels, I would say there really isn't one. On Easy, Acidic Ichor will basically perform like a much cheaper Lightning Gun. That's every bit as good as it sounds.

On higher levels, though, and particularly on Expert, Acidic Ichor is no Lightning Gun. This is because attacking at base 6 is nowhere near enough. If you try to hit a 4-fight enemy without boosting (and most good targets for this card will have high fight), your odds of hitting are going to be substantially under 50%. You need to be able to boost your shots by a good +3 or +4 to make this card rewarding. Since Seeker decks tend not to be naturally loaded with Combat icons, that's not always easy.

Of course, you do have some options for getting that Combat up. You could run Overpower, Inquiring Mind, Unexpected Courage, maybe even Scientific Theory. Minh (easily the best Seeker at running Acidic Ichor) can take Lucky!, which helps an awful lot. Daisy might be able to get Encyclopedia to work out in certain situations. Maybe your allies have the spare cards to boost you. You have options. But it's difficult enough to hit with Acidic Ichor that the card is no longer a slam dunk.

I think Acidic Ichor becomes more of a build-around card on Expert. It's not something you can just throw into any Seeker deck and get good results. If you're in a multiplayer group and your allies are doing a good job handling monsters, devoting a lot of deck space and XP to Acidic Ichor may not be worth it. It can absolutely do great work on Expert if you put the effort in, but you do have to put the effort in.