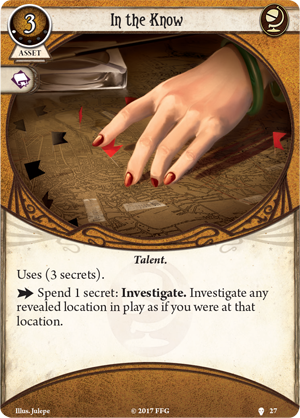 A hand driving over a street map, toying with little black and red flags and smoking a cigarette in safety while other investigators do the dirty work... That is exactly the way i imagined Seekers to be like. In the Know emanates Seekers' blatant power, they just KNOW without ever having been on-site.

With the exception of one scenario where locations are revealed automatically, In The Know is a cooperative card for multiplayer games. While other investigators do what they would do anyway, they enable the bearer of In The Know to gather clues from the locations they have visited.

There is no real downside with using In The Know. One could wish it had more than 3 uses, one could also demur that it does not change the skill test base to Intellect in locations which have different requirements, as in spoiler. One could also barricade oneself into oblivion, some people are never happy.

Synisill · 733
How does it interact with Rexs ability and Deduction? — Plolock · 14 7/15/19
Just wanted to say that you could use this to satisfy Call of the Unknown i think. most of the time this probably doesn't make sense, but in TFA with the explore deck, this could allow you to investigate a location already in play without having to backtrack. — Zinjanthropus · 160 4/27/20
2

In the Know is part of a suite of cards that I call 'remote investigation' cards, with Seeking Answers, Deciphered Reality, Connect the Dots, Interrogate, Sixth Sense (and it's upgrade), Intel Report, and Pendant of the Queen rounding out the rest of the suite. An obvious trait ties all these cards together; the ability to discover clues that are in a different location for where you are.

The advantages of remote investigation are threefold: first, you get to enjoy extra actions in your turn that would otherwise be used to move. This can significantly increase your action efficiency, as you avoid situations like:

Second, you get to keep the location with the resign action (if it exists) close at hand. Some scenarios require you to resign as an objective, and sometimes you botch the scenario and want to resign to avoid trauma. Remote investigation allows you to plant yourself at the exit and significantly reduce your risk of involuntary defeat.

Third, it makes the job of whoever's protecting you easier, as you aren't inclined to run off and get into trouble, you damsel-in-distress you. This is especially true if your party runs cards like Barricade (and it's Upgrade), Hiding Spot, Ambush, and Snare Trap.

Is it possible to build a deck themed around remote investigation? Obviously Luke Robinson's entire shtick is remote investigation (or remote anything really), but his ability is a replacement for cards like In the Know, rather than a compliment. Other than him, there are really too few cards with too few charges, spread over too many classes to feasibly build this archetype, yet. Until more remote investigation cards are printed, the likes of In the Know will remain a tech card, otherwise known as your 31st card, maybe taken when you have 1xp to spare, or in a solo campaign, where the few uses are less of a problem.