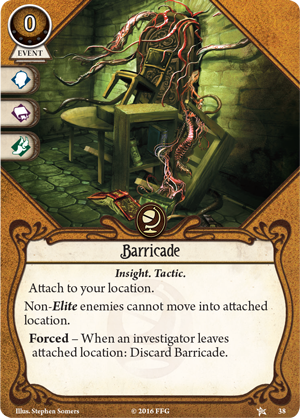 Some time has passed since this has been released. Altough there is an upgraded version, this still isn't the best card.

Altough there is an exception. It is Luke Robinson. As he can put it down on other locations, you can easily block a way of monsters, without stopping you at your place. If you use Open Gate as well you can build a wall, that only investigators can skip, but monsters are stuck behind.

mild spoilers, but i'm trying to be subtle

Its a niche case but there could be some utility in one of the scenarios. There is a tricky scenario where some locations get discarded in predictible ways (its towards the end of a cycle)... and it says "when a location is discarded, move each investigator and each enemy at that location to 'location x'". If you know when the location will be discarded, you can get some pretty strong monsters discarded along with their location.

Again, pretty niche. I agree its probably got a bit of a revival with Luke Robinson, but other than that i've never found the space in my deck.

nobody has mentioned Minh Thi Phan, who can set up into a "barricade minh" mode where she helps everyone else with skill tests all around the place. She's not invulnerable but its awesome if her random weakness is The Thing That Follows. :-)

This card is okay to bad in most cases. As is, it probably needed to be "fast:play only on your turn" to be viable.

That isn't to say it isn't without its uses. Spending one action to bar non-elites from a central location or a final spot can be great.

Card slots in this game are at an extreme premium and anyone who moves into your location will be "trapped" there as well until the barricade comes down.

With that said, there might be a build for multiplayer that relies on this card and sitting in one spot while your team exposes locations and your seeker uses cards like "In The Know" "Decipher Reality" and "Seeking Answers" to save actions on moving while the team is out exploring.

But even then, right now that kind of a "Base Camp" build is fringe at best. If you set up your base camp, no one will be coming in or out. Also, who will be your base camper? Minh likely won't get as many ability triggers tucked away from everyone. That leaves Daisy, Norman and Rex.

Given the choices, I would probably choose Norman or Daisy as they can run Ward of Protection level 2 and other cards that let you dodge the encounter deck.

I really want to like this card and maybe, if it ever gets an experience upgrade it will see some play. Until then folks, builder beware.

Myriad · 1101
Another problem with this card, it does not prevent enemies from spawning at the users location. So even with the barricade up he may draw an enemy during mythos phase or enemies with fixes "spawn" instructions come to him. — Django · 3498 3/15/18
I put this card in my last Dunwich campaigh in Daisy deck (paired with Jenny). Used it once in House Always Wins and then never (only for the icons). Do not recommend, maybe for solo plays its better. — Pgpgpg · 74 3/16/18
It doesn't prevent enemies from spawning at your location, so it's pointless in solo. — Django · 3498 3/17/18
I mean you van have hunter enemies spawning elsewhere and coming to you and then it might be useful. — Pgpgpg · 74 3/18/18
1

There are some combo mechanics, In the Know and Connect the Dots for example, still the benefit is extremely limited in scope. The levelup version Barricade is vastly better but again the benefit is so transient that the XP commitment and card slot will just feel that much worse when you have this card in hand unable to leverage it into a useful gameplay benefit.

Personally I think the barricade should have resources on it, and resist so-and-so many attempts to move or spawn into a location, and allow the player to leave instead, but this is not so and thus this remains a terrible card to include in pretty much any deck.