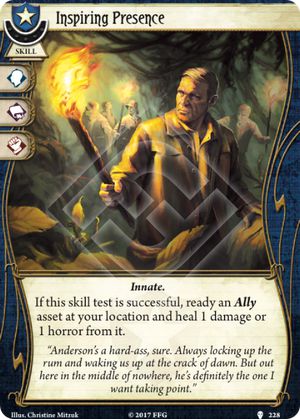 Good for Beat Cops, Aquinnahs and Duke. If you are playing those, you probably want to try this.

That means Yorrick REALLY likes this one, as do most Mark Harrigan decks that run ally heavy.

If you are playing those two characters check it out. Otherwise, I would skip this.

Myriad · 715
Dario, too. Leo Anderson loves this card, of course. — crymoricus · 203 1/11/19
I can see a David Rensfield/Arcane Initiate Diana running this card — PanicMoon · 2 6/26/20
I don't really get the conclusion: good for Beat Cops, ergo skip it, if you don't play Yorrick or Mark. I'm currently almost done with a Dunwich campaign playing Zoey, and I LOVE the combo with upgraded Beat Cop. I have a deck with only Allies, that exhaust on abilities (also Mr. Rook, Morgan and Whateley). I think, I used it maybe twice on Rook, in particular, before I upgraded my Beat Cops. But having 5 charges on Beat Cop rather than 3, AND being able to use them twice a round (e.g. on a 4 health enemy, or a Whippoorwill, followed by a 3 health creature) is amazing! — Susumu · 1 6/26/20
3

I want to make a point about this card, and it's three cousins "Watch this!", Eureka!, and Resourceful, skill cards with three, fixed, distinct icons.

These are, in essence, win-more cards; cards that get their value when you commit them to tests you're already likely to succeed, and will fail you should you be looking to even the odds against a skill test that's beyond you. They will only ever add +1 to whatever test you perform (save for some fringe cases where two attributes are being tested in one skill check), and they pile on the pressure to pass that test, as the gap in outcomes between success and failure widen from committing this card.

Skill cards lie on a sliding scale between improving your odds of succeeding versus increasing the rewards for doing so. Cards like Cunning and Inquiring Mind occupy the former extreme, Inspiring Presence and its ilk occupy the later, and the core set neutral skill cards (e.g. Perception) define the middle ground. When picking which skill cards to include in your deck, you need to be mindful of which extreme they lean towards.

...Which leads to the catch-22 of Inspiring Presence and co.; that they have three skill icons for different attributes, but will only really find use in test with base attributes of 4 or above, of which no investigator has more than two such attributes, and only a handful have more than one. You'll do yourself a dis-service should you spread yourself too thin,.

So here is the big conclusion of this review; the flexibility of this card exists NOT at the game stage, BUT AT THE DECK-BUILDING STAGE. In essence, these win-more cards are almost identical to Vicious Blow, Deduction, Fearless, and Survival Instinct; they just have a place in more decks thanks to the icons. Using the example of Inspiring Presence, most Guardians would compare this directly to Vicious Blow, but other takers, like Jim Culver or Joe Diamond, could very well make the case of replacing (or complimenting) Fearless and Deduction respectively in a more ally focused deck (like for instance, Olive McBride and Dr. Milan Christopher post Taboo List).

These cards are easy includes into decks that can make use of them, their power deriving from benefits that require no actions OR resources to play. Just, take care to not fall into the trap of thinking your deck is now all-purpose; just because the deck-building metrics tell you you've got a lot of , , and icons in your deck, doesn't mean you're going make use of all of them.

Lucaxiom · 1857
This seems like it assumes that you are always testing against the same value, which isn’t true, or that these ‘win more’ cards can’t find additional opportunities from the tests of other investigators (most can). There is plenty of value in these cards as a pseudo wild when you just need to push a break point for yourself or an ally, or can be staples on a low test (which can be expected within the natural variance of a scenario, or set up with a Flashlight). — Death by Chocolate · 56 10/24/19
I don't fully disagree with your analysis, but I don't quite understand how your analysis supplements the idea that these are "win more" cards. You can, as DbC pointed out, test these cards at varying values. Sometimes you get a high fight test that's a bit too risky even if you're Leo Anderson, while other times you'll get a very low Shroud test that might be worth throwing this on to. It's only win-more if passing was enough to win the scenario anyway; what these cards actually let you do is maintain momentum. It's just statistics- sometimes you will lose a test you commit these to, but if you have enough effects like this in your deck, you can count on some number of them triggering at some point, and the more icons it has, the more likely it is you'll find the time to get the effect. Some of them, like Resourceful, Eureka!, and Inspiring Presence, are essential cogs in a deck's strategy. I wouldn't consider that win more any more than I'd consider Emergency Cache win more. — StyxTBeuford · 2056 10/24/19
Yeah i think the big use of 3 icons in my opinion that you are missing in your review is the value of "I am mark harrigan, i can only use this as a fight icon effectively, but my buddy daisy could have it to help her investigate, or my buddy agnes could use it to cast a spell, and I still get the benefit of readying and healing allies" — NarkasisBroon · 1 11/13/19
I agree with the Win More analysis. You don't want to commit these cards to tests that are a bit too risky because it really isn't about going from 0 to +1 or +1 to +2. You want to be sure that you pass the test. Very, very sure. Watch This! is probably the most critical one to pass since you gambled resources on it though but you put these cards in the deck because you want the reward in addition to the skill icon. One additional factor that goes beyond the analysis is using Grisly Totem or playing in a group with Minh where the card now becomes a wild +2. That does make a considerable change to the test results. — TWWaterfalls · 539 1/9/20