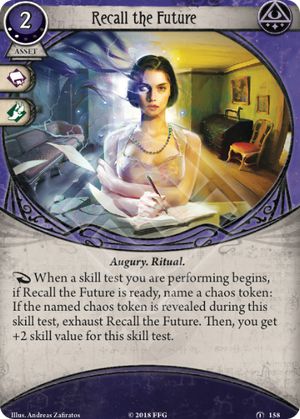 I do think that this seems like an under-utilized card. I think that people think initially that it is an interesting card, but don't like the way that it makes the investigator feel when it isn't actually "doing anything". When you don't pull the chaos token from the bag that you called, the card feels as though it is not doing anything for you and it was a waste.

It is always doing something for the investigator, and only at the end of the game can you really look back and see exactly what it did in that one instance of the game. But it is best not to look at it from that perspective, because some games you will use it many times and some you might not see the token at all.

It should just be analyzed statistically as to what it is doing for you every game at the pre-game stage when it is operational. Statistically it should be increasing your chances of success on every pull by 1 or 2 tokens (sometimes 3) which would usually account to 2/15 (roughly depending on the bag) or a 8-13% better chance of success on every pull. Until you actually gain its benefit of course for that round. When you have 2 on the table your chances go up for every pull even further.

Sometimes I think it is a good idea to look at a card from a different perspective and all of a sudden the card feels better. For instance (and this won't directly relate, but I think it is a decent way of thinking about a similar effect)...if the card read that you would gain +1 in all of your stats until the card was exhausted I think that it would be looked at in a much better light. It really is doing something similar to that. Usually by calling a token with this card you are eliminating 2 tokens, and usually by getting a +1 on a test you are eliminating 2 tokens (sometimes many more at the right level with bad tokens etc.). While this example is better with the +1 instead of the called token in most cases, in many situations it identical to what the original text of the card is doing. But it feels better to think of it "doing something" proactive instead of reactively.

I know that I want to come back to this card and spend xp on it again, and just wanted to discuss it a bit. I think it is a good card that just doesn't give you the satisfaction for the work that it does.

Defiance, eat your heart out. (Worth it!)

This card is basically insurance against the chaos bag. All of those narrow "I am fine so long as I don't draw this token" situations can now be eliminated due to this card. It works really well with cards that draw multiple tokens and might have some interactions with ritual candles (which, again have interesting interactions with multiple token draw cards).

Add in some token sealing and you have some consistent tests. Most mystics will like this card, but it will really shine in any investigator (Jim Culver and Father Mateo especially) that is considering the upcoming Olive Mcbride and Dark Prophecy.

This card does some serious work with Premonition, Olive McBride and Dark Prophecy. I also think that this package is particularly potent in Sefina Rousseau as she also has a pretty bomb diggity elder sign trigger AND she can play premonition on tests with cards like Double or Nothing.

So in closing, this card is amazing. Play it with Premonition, Defiance, Dark Prophecy and Olive and you should be well on your way to having a consistent experience through Hard difficulty.