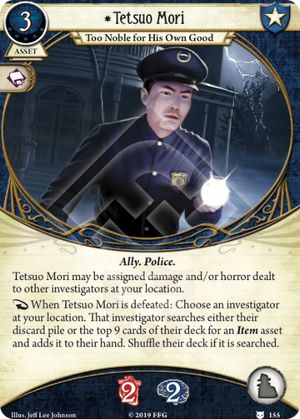 Survival is a problem even for beefy characters, Tetsuo is a 2 - in - 1 combo that tanks a couple hits and then hands you a gun with which you can now avenge him.

An ally card with 2 and 2 life is worth 1 resource already (see: allies) and Tetsuo backs that up with a slightly better form of Prepared for the Worst as well. At 3 resources he's a tiny bit hard to fit sometimes but you'll never regret taking the space and time to get him into a deck and onto the table.

Absolutely check him out if you're going for a big gun build.

Tsuruki23 · 2016
There's nothing slightly better about his Prepared for the Worst effect! His one can affect other investigators and can check the discard pile to return spent items, which is huge. Good review though. — The_Wall · 239 1/16/20
He's not like prepared for the worst in your starting hand cause he needs to die first and then you need to play the weapon with an enemy in your threat area. But he's great for searching your next gun, in case your current one runs empty. — Django · 3554 1/16/20
2

This card is just going to be crazy with Tommy Muldon!

Tetsuo gets defeated, Tommy gets 2 to 4 resources, Tetsuo gets reshuffled into Tomm'ys deck, and Tommy gets to pick an asset like his signature gun from his discard pile or deck with a bit of luck? And a level 0 card!?

Oh, and I should add that it's better than Something Worth Fighting For or True Grit as it can soak up to 4 damage/horror for a cost of 3 (dealt to other investigators as well).

Ezhaeu · 38
It’s a good card, not all good cards should be tabood. Tetsuo is great but his effect is slower than Prepared for the Worst and he doesn’t have built in boosts. I think he’s very good but not broken. — StyxTBeuford · 12473 12/30/19
He won't be in every deck. He might be an interesting option with anyone who has seeker access for a double dip of search with Mr Rook. — Myriad · 1103 12/31/19
Yeah, Tetsuo's biggest drawback is that he has to be defeated to get his full benefits, and that's not always feasible (or wise). He really needs other combo pieces to reach his true potential. — pneuma08 · 25 12/31/19
I played him in 1st TFA with skill based tommy. Testuo died like 4 times, reloading Becky and returning 2 items from discard thanks to Mandy — Django · 3554 1/10/20
@Django Mandy’s ability only helps when searching decks (“their deck or the encounter deck”). It doesn’t help you search your discard pile. — Death by Chocolate · 796 9/1/20
Definitely not taboo-worthy. Good but not broken. Honestly you'd have to taboo half the playable cards if you'd taboo this one. — flamebreak · 18 2/5/21
0

How does Tetsuo Mori interact with Tommy Muldoon's ability? Do i get it right that Tetsuo lets you search for an item if he's defeated and Discarding is part of "defeat". Tommy's ability only replaces the discard effect so you can activate both?

Django · 3554
Tetsuo must be in play in order to trigger his ability. If you manage to order the triggers correctly, then you can activate both abilities. — PartyTime · 1 3/30/20