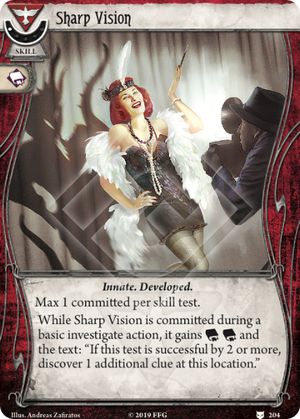 Slap it in -nearly- any deck and you wont regret it.

A huge +3 to get 1 or 2 clues with is quite good. It can help finish a high difficulty location or speed you up through a medium/low difficulty one. It's so simple and so good.

Keep in mind that on every success, even the one's that dont net you an extra clue, the card saves you an action that is the equivalent of one successful investigate, here's why:

Only on a complete failure is the card wasted, but what test-based card is'nt wasted when youre drawing such big negative tokens that 5+ value tests fail?

Even if you're not playing a clue dude give this thing a fair consideration in multiplayer, if there's a running around with a 4+ base then you can bring this to chuck at them, it is a non-binary way to contribute clues but an effective one nontheless.

Tsuruki23 · 2234
I really like this card in multiplayer. If your party has a dedicated clue guy, then Sharp Vision is basically an actionless clue token for the team. Note that this card requires a basic investigate action. I think you cannot combine it with Flashlight (or similar assets), or events like Winging It. This drastically reduces the usefulness of Sharp Vision in a deck that generates its clues by such means. I think in solo play this card is most useful if you play play an Int 4+ investigator who uses raw stat boosts and basic actions to generate clue tokens. — NoobTheReal · 1 8/8/20
3

This card looks like the good ol' Deduction but for survivors. It is a perfect card for Minh Thi Phan as she does normal investigate actions without using assets such as Fingerprint Kit. Her signature ability which gives +1 when commiting cards plus the 3 pips from this card and her basic stats (4 intellect) gives a really good 8. Also, I find this card really great for solo Silas Marsh. It can boost his poor intellect to 5 and depending the outcome of the chaos bag, he can decide if he want to commit or not this card. Also, boost this sweet 5 with a Grisly Totem and Resourceful and you will never need Newspaper again!

Sotosprotos · 78
Excellent analysis! This card makes me hope for a high INT Survivor. — mogwen · 250 3/10/20
I wonder if Minh actually wants to sub out something like Winging It for this. Winging It avoids the King in Yellow debacle, and does not have the succeed by 2 conditionality. Plus this card costs xp, something that might hinder Minh since she has a long list of things she wants upgrade before this. I think I would rather spend the 2 XP on a Cornered for Minh than 2 XP for 2 copies of Sharp Vision. Maybe its just me — chirubime · 14774 3/11/20
I think this is a very good card for Minh and maybe Wendy but for lower Int investigators I don't think it matches up to the essentially testless clue gathering options that they have. They can use Flashlight or Winging It (or Lantern) to reduce shroud and combo it with LWIF or Lucky. Testless clues at 3 or 4 shrouds is really powerful. — TWWaterfalls · 852 3/11/20
Of course Mihn needs the Cornered as fast as she can get it. But this card is a good boost in the overall great choices she has between Survivor and Seeker. I haven't tried this build yet as I got Dream Eaters after I finished the Campaing I played with Mihn (Path to Carcosa) but for sure, the next time I will return to Arkham with her, I will spend my old exps for those two copies. I will post again my thoughts! Also about the question of TWWaterfalls: You are correct. But the idea to this is that you can recycle this card using resourcefull. You can also use all those cards that you mentioned combined to achieve the best possible result. — Sotosprotos · 78 5/14/20
An important difference between Sharp Vision and Deduction is that the former requires an "basic" investigate action. So you cannot use it together with Lantern, Old Keyring, Flashlight ... — NoobTheReal · 1 8/8/20