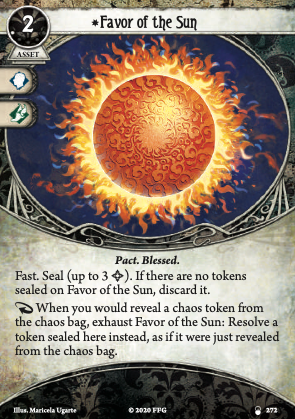 In return it gives:

Not a huge cost but a fairly mediocre pay off for the investment. For similar affect you could just run Unexpected Courage without the need for the setup.

However, alongside Ancient Covenant this card becomes a powerhouse.

With Ancient Covenant instead of 3 x Unexpected Courage you get 3 x guaranteed +2 tests.

This is a hugely powerful affect, +2 should usually translate into an auto success for most attempted skill tests. However, even if +2 isn't enough you'll know exactly how much you'll need to boost/commit.

It's also immensely flexible. You can pick the exact tests you want to succeed and the test doesn't even have to be on your turn:

For more power combine with Unrelenting (1) to seal the good tokens to get the draw 2 card effect knowing you're going to pass.

The only real limit is the exhaust stipulation so you'll have to pace out your successes over several turns.

and also the neutral:

P.S. I've now play tested this in Preston Fairmont and it's as degenerate as I expected it to be. Comboed with the success / over succeed mechanics in Rogue this effect is far too powerful. While occasionally being able to cheat the bag is fun, being able to reliably do it once every turn takes away a lot of what makes Arkham the experience it is (the chance of drawing the ).

Rogue is the most able to abuse this with big all in play, see my Preston - The Favoured Sun Over Succeeds deck for an example of what's possible.

However, it's way overtuned in any class and needs to be tabooed. I would suggest that Ancient Covenant needs to be only be usable on natural chaos bag draws.

bobblenator · 327
It's fast, no action required. — SSW · 180 4/22/21
yorick can replay this card after using this card to pass a test to guarantee playing this card to use it pass a test to guarantee playing.... — Zerogrim · 248 4/22/21
@SSW thank you, corrected — bobblenator · 327 4/22/21
Preston Fairmont isn’t on your list, but I’ve found him to be able to make pretty good use of the “Favor of the Sun/Ancient Covenant” combo. Keep Faith is also fast, so I like to wait until I have both Favor of the Sun and Keep Faith in my hand, then play both using Preston’s inheritance since they’re both fast. As a 3 card combo, it takes some effort. However, being able to guarantee a success is pretty nice, and Preston can get the cards out quickly. — ArkhamInvestigator · 275 4/22/21
@ArkhamInvestigator thanks for the heads up, I completely missed Preston. Or maybe I blocked the thought because the combo potential in Rogue when you've got regular guaranteed successes seems absolutely busted! — bobblenator · 327 4/22/21
The card is extra monster when paired with taboo'd .35 Winchester or with Shotgun and Ancient Covenant. — Death by Chocolate · 1164 4/24/21
@Death by Chocolate Nice suggestion! Very powerful with Tommy, it turns the 0xp .35 Winchester into a much higher XP weapon. For Shotgun even wth the guaranteed +2 it's still hard to see Shotgun outperforming Lightning Gun or Flamethrower as it still suffers from limited ammo, but certainly brings it up to being a competitive option. — bobblenator · 327 4/26/21
@bobblenator Shotgun is very much a build-around weapon, and between Venturers, Extra Ammunition, and 1x Custom Ammunition, I usually end the scenario with TOO much ammo on the Shotgun even though I used it on cultists several times just because. If you’re using 4-5xp weapons, the reload cards are all high value, and once you start reloading, the extra 1-2 ammo on other weapons disappears unless you are using Rogue reloads (Swift Reload and Contraband) that synergize with higher starting ammo. — Death by Chocolate · 1164 4/27/21
Favor of the sun, this ancient covenant and sacred covenant has worked wonders so far for Silas and Mary in their endeavours to thwart the Innsmouth Conspiracy!!! — gazzagames · 7 5/7/21
William Yorick, Favor of the Sun, Sacred Covenant, .35 Winchester. The guaranteed bless token lets you dish out reliable 3-damage attacks. Often the +2 combat from the bless token is unnecessary, so you can put it right back in the bag with Sacred Covenant. Then recur FotS with WY’s ability. I also recur Venturer to refill my ammo and Rite of Sanctification to enable Dark Horse. Unstoppable. — Runic · 1 10/3/21
The shotgun is easy to refill for Tommy. Just take two Ventures into your deck and "kill" them with Spirit of Humanity when their ammunation run low for a full refund on the Venturer.s — Chiungalla · 1 7/7/22
0

Someone above pointed out the virtues of using this with Ancient Covenant, but it also has a lot of synergy with grotesque statue, any of the curse based spells and Paradoxical Covenant.

Using the three above you can basically fish in a bag full of curses for only curses and then release a blessing from this card to make it an auto success. This results in extremely powerful Mystic spells.