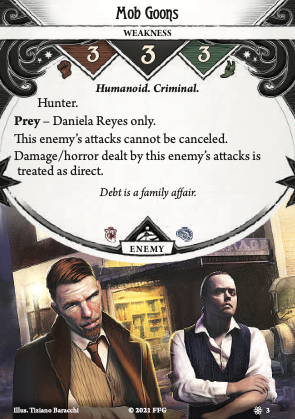 A great combo-enabling signature for a couple of otherwise unreliable guardian cards!

"What's that, Vinnie? You want me to put on my tuxedo?"

"Cuz it sounds like you want me and Jessie to play 20 questions again!"

"NO!! Look, just... just take off the cuffs for a few minutes! I can't feel my hands anymore!"

"Being out of the cuffs isn't a right, it's a privelege, Vinnie. Now try and "remember" something, while I try and remember how to do a bowtie..."

An enemy weakness that asks the question "why do mob goons cause horror?" Looking at the two elements, the effect and the discard condition, we get:

The effect: Daniela clearly has some history with these guys, and so she knows how do deal with them. About the only special thing about them is that direct damage effect, which turns off things like Bandages†, Guard Dog, Peter Sylvestre (2) as well as soak in general. The horror component of their attack is more worrying for Daniela, since she has less Sanity to use, but these bad boys aren't likely to get more than one hit in before she finishes them off, so it's not that significant. As hunters, this isn't an enemy weakness you can ignore, and Daniela isn't big on evasion, so the "mitigation strategy is doing 3 damage in one action. The obvious plan is to use Mechanic's Wrench to provoke an attack, then defeat them with Daniela's ability and a wrench attack. It's so obvious that it's a little odd that they don't have 4 health just to mess with it. If you'd rather not take an attack, many weapons + Vicious Blow will do the trick, as will Chainsaw. Brute Force might be the most direct solution, as Daniela would attack at 8 vs 3, making the 3 damage pretty likely to land, even without extra boosting. If you are worried, throw in an Overpower and get a card draw. I'd also like to endorse HanoverFist's janky solution, above. It's not efficient, but very satisfying if you can pull it off..

The discard condition: Beat them like rented mules.†† It's likely to take Daniella 1, maybe 2, actions to finish them.

Like most enemy weaknesses, this is below average, unlikely to end a scenario or campaign or, really, cost you more than one action.

† Thanks to Susumu, I realized that I meant Flesh Ward, not Bandages. Mea culpa.

†† Note: this should not be taken as an endorsement of beating mules, who are mostly hardworking and affectionate creatures.

LivefromBenefitSt · 885
How should they turn off Bandages? You can heal direct damage like any other damage. — Susumu · 206 4/23/22
You are absolutely correct. I was actually thinking of Flesh Ward. The Goons go up slightly in my estimation, since they also turn off a bunch of the Survivor "escape death" cards, although that would be a pretty rare situation. — LivefromBenefitSt · 885 4/24/22
...Why DO the Mob Goons cause horror...? — dezzmont · 110 4/26/22
That is a question for the ages. Maybe they are epistimic goons, and, while they beat you up, they also cause you to doubt the foundations of your own beliefs and how they were formed. "Nice conception of God you have here; it's be a pity if something happened to it..." — LivefromBenefitSt · 885 4/26/22
Thanks for the nod to my silly Handcuffs-Interrogate-FineClothes combo! It was inspired by Mordenlordgrandison's Handcuffs-review that suggested perp-walking a fishman around the board and interrogating it. That said, as a Humanoid enemy who will show up at your location, Mob Goons ARE one of those rare weaknesses that actually enhance the value of some great cards, esp for Guardians/Daniela, such as Evidence! and Scene Of The Crime. — HanoverFist · 487 5/9/22