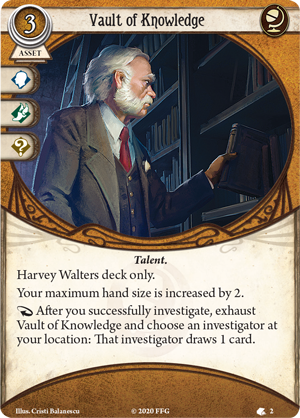 Probably one of the worst signatures in the game, it gives you an increased hand size which is the only thing saving it from the trash bin. There are major flaws with this card that need to be addressed.

A: you can only use this if you pigeon hole yourself into the role of clue gathering, which means to even get to use this effect you have to be willing to discard every other viable action you could do with Harvey, seriously! being forced to investigate every single round can really force you to be stuck where the clues are and away from the action.

B: its benefit is actual a downside when you think about it, so besides it amazing ability to hoard cards it also makes you draw cards from your deck, every card taken from your deck just gets you closer to a weakness and an eventual horror damage, its not worth speeding up that kind of doom clock, you use this too much and you may end up losing half your sanity just because you drew cards. (and if you use Harvey's ability you end up doubling the speed of your own demise)

C: it can grief your teammates... Unacceptable. You can force a teammate to draw weaknesses, discard cards from their overstuffed hands and take horror damage as you repeatedly get them to draw through their entire decks, I can't imagine any player ever wanting to play alongside a Harvey and seriously disrupting the natural rhythm of their deck to a faster more dangerous beat.

Side note: while its icons aren't good (triple fight would allow you to use strange solutions on bosses more regularly) the real killer is even if you try and get rid of this card Harvey's natural ability will likely make you just draw it again, especially if you are sensible and try and commit it when your deck is near empty and need to rid yourself of its vile temptation/S.

Zerogrim · 236
I.... cannot tell if this is sarcastic. Card draw always gets you closer to weaknesses on average, but that's not inherently a bad thing if you expect to draw through your deck anyway. I've said it multiple times, but card draw in Arkham is still heavily beneficial outside of Doomed decks and almost always worthwhile. The issues of Harvey taking too much damage from his weakness is fairly solvable with a single Bulletproof Vest, while the sanity issue is fairly moot as long as you have any allies at all. In any case, both Harvey's sig and his ability allow other investigators to draw cards as well, so if you are concerned with burning yourself too quickly, you can throw the draw onto someone who needs it more instead. Now, I don't think this is as good of a card draw signature as Minh's Analytical Mind, but it's still a perfectly solid signature, with the ability to transfer the draw to other investigators making it an incredibly useful tool in groups. Does your Guardian need more draw to find the weapon they need? Is your Rogue looking for that last Ace for Three Aces? You get the picture- this thing has pretty great group utility. Finally, the problem of needing to investigate every turn. I don't get this at all- you're Harvey Walters, an investigator with 5 intellect and only Seeker cards in your pool. Yes, you should be investigating virtually every turn. As long as you do it once a turn, you can trigger this every turn, but there's no reason you need to investigate just to trigger this, it's something that leans into what you should already want to be doing instead of constraining you. It's sort of like complaining that Grete Wagner gets you clues only if you're fighting- technically true, but you should really only be using the card if that was your plan to begin with. — StyxTBeuford · 12690 6/7/21
I find it really funny actually that in a game where you can play cards like You Handle This One, You Owe Me One, and Delve too Deep, that this card is somehow the step too far in terms of potential griefing, and for what it's worth, all of those cards are very good. — StyxTBeuford · 12690 6/7/21
Literally a sarcasm tag at the end, man. Even without it, if you find yourself wondering if something's sarcastic, maybe wonder a little more before writing out an essay in response. — SSW · 167 6/7/21
sat·ire /ˈsaˌtī(ə)r/ Noun: The use of humor, irony, exaggeration, or ridicule to expose and criticize people's stupidity or vices, particularly in the context of contemporary politics and other topical issues. — SGPrometheus · 635 6/8/21
The /S at the end I thought only applied for the whole last paragraph. I literally could not tell if it referred to the whole thing. I apologize. — StyxTBeuford · 12690 6/8/21
I thought it was more interesting than writing "A free card draw every turn that you can give to allies is universally great, the one thing I don't like is the big hand nudge but that can be ignored" in case anyone still had doubts on what my point really was. — Zerogrim · 236 6/8/21
Great bit! /s — MrGoldbee · 1220 6/8/21
Candidly my thinking was, if this were a sarcastic post, that it should have clarification on why those points are not necessarily correct, since this is a review. I meant no offense, I just wanted to make sure I hit the points I wanted to hit. — StyxTBeuford · 12690 6/8/21
0

This is... not flashy at all, but a good utility card for "Big Hand" Harvey.

It's no match for Duke, but what is?

It's about equal to Roland's .38 Special, since it just lets you do what you wanted to do a bit better.

It's a bit better than Heirloom of Hyperborea, since it always lets Harvey do what he's good at as opposed to being good only in some builds.

It's better than Jake Williams, since you will always want to play it, and better than Jenny's Twin .45s, because it doesn't fill your hand slots. It's better than Becky, because Harvey doesn't have an overly-close attachment to his Vault that makes other investigators nervous.

LivefromBenefitSt · 885
I could not disagree harder. Most signatures that aren’t guns or allies are better than those guns or allies. Think of Minh’s Analytical Mind. This is very much equivalent to that, drawing you more cards a turn and enabling synergies that work well with Harvey’s ability anyway. In fact, for Harvey it’s arguably better since 3 cards a turn is much better than the 2 that AM gives you. Sigs that draw cards are borderline broken. — StyxTBeuford · 12690 9/5/20
This is well above Cross and Trumpet easily. — StyxTBeuford · 12690 9/5/20
On the other hand, Harvey has a lot of ways to increase hand size and draw. I agree that Minh and Caroline have Signatures I would put above this, mostly because they open up new abilities (or improve existing abilities). — LivefromBenefitSt · 885 9/5/20
I mean, those ways also exist for all Seekers, but only Harvey gets this. I would put this comparably with Minh's, but well above Carolyn's. — StyxTBeuford · 12690 9/5/20
Real talk though, Becky is ridiculously good. Most guardians would give both arcane and their body slots for a gun that never runs dry. — SGPrometheus · 635 9/7/20
Nobody has mentioned that Harvey can assist other investigators in digging for their cards. The support part of this card makes it one of the best signature cards in the game. — TWWaterfalls · 832 9/7/20
Becky is.... okay. The nice thing about Becky is the ammo. Unfortunately, like most sig guns, it just pales miserably to higher level Guardian options like Flamethrower or Lightning Gun. I personally like Roland’s gun the best of all the sig guns, and I rank sig guns low as far as sigs go. — StyxTBeuford · 12690 9/7/20
Blessed Becky is solid tho! — MrGoldbee · 1220 3/12/21
You don't have to use reactive ability if you don't want to. It's optional. If drawing a card will put Investigator in a dangerous situation just don't use Vault of Knowledge reaction ability. — Njagas · 1 1/28/22