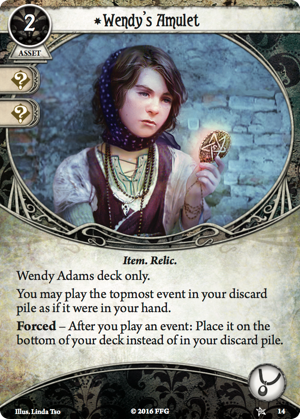 Wendy's Amulet is a great Signature card that allows Wendy Adams to focus on an event-heavy deck. The Survivor faction has great event cards in the form of Lucky! and "Look what I found!", and Wendy's access to Rogue cards lets her play with very powerful events such as Elusive, Sneak Attack, and Backstab.

Wendy's Amulet takes up an Accessory slot, which is not a huge deal since there are not that many Accessories in the first place. Though it competes with Rabbit's Foot and the Elder Sign Amulet, it's genuinely not a big deal to overwrite those other assets with this powerful Relic.

With Wendy's Amulet in play, you can play the topmost Event in your Discard Pile as if it were in your hand (note that Play means paying the cost to play the card, you can't commit the card to a skill check!). The Forced effect of the Amulet states that playing an event requires you to place it on the bottom of your deck as opposed to your discard pile. The way these two interactions work, you generally want to play Wendy's Amulet only after you have played a couple of very powerful event cards, and then play them off the top of your discard pile.

This makes the order in which you play your events remarkably important! If you play a "Look what I found!" to Investigate and then play Wendy's Amulet, you better be sure that you want to Investigate again in the near future, or else you won't be able to dig through your discard pile for the other powerful events you just played! The importance of order makes it so playing generic events that are almost always useful, such as Emergency Cache or Will to Survive allows for greater flexibility moving forward. Of course, if you really need to focus down getting clues or evading or killing a monster or so, then you can time the Amulet well enough with those appropriate event cards.

Of course, as with all Signature cards that don't start the game in play, you can't guarantee Wendy drawing it. As such, unless it's in your hand or you have some way of ensuring you get it very soon, it's not worth fretting too much over the order in which you play your events (though, in the same breath, if you're going to play two or more events in a turn, it is worth thinking about which one you'd play last...). And, if you draw it at an inopportune time, you can always pitch it in to a skill check for the +2 Wild icons. Also, the fact that it is an Item makes it a great target for Scavenging.

An interesting part of the Forced ability is that the rules of "Instead" cause it to only place the Event card at the bottom of your deck at the point in time where it would resolve and then go into your discard pile. There are some event cards that have been revealed that do not place them in the Discard Pile but rather attach them to some location: #Lure is the example we have for now, but spoilers have revealed other cards... In the case of #Lure, after you finish playing it, it does not go straight to the Discard Pile but rather attached to your Location. As such, Wendy's Amulet Forced ability does not trigger as the "Instead" part of the text does not happen. At the end of the round, when Lure is discarded, it will go on the top of the Discard Pile (the Forced part does not trigger for this either, as it was not 'just' played). Consequently, next round, Wendy can play the Lure again from her Discard Pile! This allows Wendy to infinitely recur the Lure, and help keep monsters away from the other investigators!

EDIT: With Path to Carcosa out, Hiding Spot is now a much better card for Wendy to do some crazy shenanigans against the enemies out of the Encounter deck. With the ability to keep recurring Hiding Spot out with the Amulet, she could play it multiple times to help keep critical locations safe for their fellow teammates. This works because, like Lure, Hiding Spot does not go into the discard pile.

Darthcaboose · 136
Also note that even after Wendy's Amulet has been played, events committed to skill checks will go to the discard pile, not the bottom of the deck. So you don't necessarely have to wait with playing the Amulet until you've played a bunch of events. — Orange Devil · 1 3/31/17