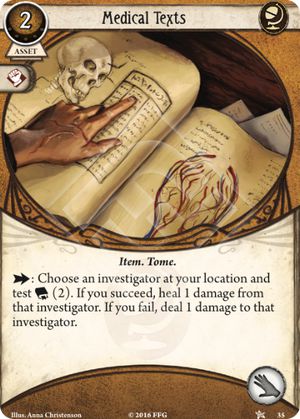 My first experiences with Medical Texts while playing the 1 core set Roland Banks starterdeck were terrible. After I was done, I buried it at the bottom of the game box and vowed never to use it again. At the moment the healing options in the game are very limited though, so I thought it might be worth taking a better look at Medical Texts.

Medical Texts is currently the only card that offers "unlimited" healing, which is a good thing. The problem is that it's a card that doesn't get along with just any investigator, as I found out the hard way.

Put it in the hands of Roland Banks and it's a not so reliabe heal that you can waste a precious action on while getting damaged in the process... Time after time... after time... But if you put it in the hands of a high intellect investigator like Daisy Walker, Daisy becomes a walking one-woman ER unit. With an un-boosted Intellect of 5, Daisy starts all of Medical Texts skill tests with +3, netting you a very good chanche to succeed. And with Medical Texts being a Tome, Daisy's unique skill will let you use it once each round without costing an action. (True story: I once "Burst-healed" 4 health in one turn that way.)

So in short: with Medical Texts it's all about the investigator using it.

Heyenzzz · 4822
Very good review. A lot of what you said about Medical Text in Roland vs Daisy is very similar to First Aid in Roland vs Skids. Roland sort of needs his actions for beating up the inevitable hordes of baddies streaming at your group, whereas Skids is evading, moving to a new location, and gets extra actions from Leo de Luca and his investigator ability. I've found First Aid to be exceptional in Skids hands and decent for Roland (if only because his Sanity threshold is so low, he desperately needs it to live). — PaxCecilia · 273 11/22/16
First time I used this card it was on Daisy hit by grasping hands which melted her HP to 2. I risked Medical Texts, twice... got an autofail and -4. Bye bye Daisy. — ratnip · 53 4/13/18
really bad card...IF there was a redesign:Action: Choose an investigator at your location and heal 1 damage from that investigator.test [book (3)]. If you succeed, If you succeed by two or more, move 1 additional damage from that investigator to an enemy at your location. "Physician, heal thyself" — Chai · 1 3/31/21
1

This card, already struggling on release for anyone who wasn't Daisy, seems basically dead now. There are just so many other tomes and actions to take that seem more interesting and/or useful, even for Daisy. In a recent Card of the Day on Reddit over 40 different comments found slightly different ways to state how little they thought of this card. (Apologies to those just getting into the game, to whom probably none of this will apply.)

To me, this calls for an intervention.

My challenge: either legitimately come up for a decent use for the card as-is and make or have made a deck with it, or (more likely?) come up with a redesign.

I'll start with a redesign:

I'm not going to say it's any good, but it's much more interesting! Please critique, but the rule is, if you do, you have to propose your own!

iguanaDitty · 4
I mean, you’re just describing forbidden Tome, which requires a scenario of work to get, more XP, more cost, and more actions — MrGoldbee · 1242 10/9/20
I agree the card is pretty trash, even at the time of release. This is atypical since many of the core set cards are excellent, even if they see less play (drawn to the flame for example). The benefit to medical text is the use is unlimited, but it's severely punished for this by having a test of 2 (which isn't high but seriously) and an extremely adverse consequence if you fail/autofail. Redesign is somewhat hindsight 20/20 though so I think for me, I'd suggest an upgrade. 2 xp, intellect test of 1 and remove the possibility of it damaging on a fail and replace it with the ability to heal ally assets as well. Daisy would love it. Even now, I think it's among her better healing cards especially if she's a dedicated healer as it can be a free action for her. — LaRoix · 1580 10/9/20
I like LaRoix suggestion. Here's one I was mulling over until I saw LaRoix's: action - heal 2 damage. Draw a token. If it's a bad stuff token, only heal one damage. — jdk5143 · 96 10/9/20
How about --> Heal 1 Damage. Test Intelect (2). If you pass, heal an additional damage. If you draw an icon token, take 1 Horror. Have you ever tried to sew a wound shut while consulting a book? I know medical librarians who have... stories. — LivefromBenefitSt · 907 10/9/20
Once upon a time this and Old Book of Lore were the only level 0 tomes, and if Daisy was having trouble drawing the latter this was an okay substitute. If we ever see Vincent Lee get printed, who would most likely have an ability that procs on healing damage, this card might find its forever home. — MiskatonicFrosh · 139 10/9/20
Here's a big brain combo: intentionally fail the test to deal the final point of damage to an ally who has Cheat Death so that they can discard all the treacheries in their threat area. — Zinjanthropus · 208 10/9/20
I'm sorry @MrGoldbee, you earn a tentacle demerit since you did not follow the rules. — iguanaDitty · 4 10/10/20
I like everyone's approaches. One thing I liked about the original is the negative consequence if you fail, so extra points to @Zinjanthropus for coming up with a far-fetched combo. — iguanaDitty · 4 10/10/20