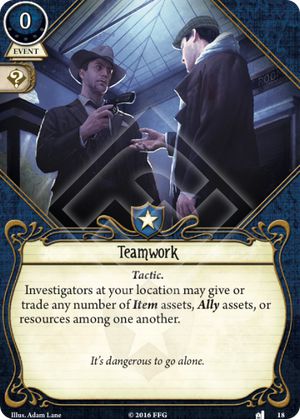 Teamwork is a card that, on it's own, requires such a knowledge of the resource dependency of not just your own deck but each of your fellow investigators' decks as well to determine it's usefulness, that the effort involved in getting and analysing that information is better spent picking a different card and doing something more meaningful with your time. However, Teamwork also has the benefit of facilitating some jank, of which I'm going to detail three such instances below:

First, poverty decks, defined by decks that centre around Dark Horse, have an annoying catch-22; they need to have the resource expenditure to get your resources to zero in order to facilitate Dark Horse, but also be cheap enough to operate without resources once Dark Horse hits the field. The solution is usually cards that have additional avenues for spending resources, AKA Fire Axe and Dig Deep, but investigators that can take guardian and survivor cards have a third option; donating your resources away with Teamwork. So William Yorick, Tommy Muldoon, "Ashcan" Pete, and Zoey Samaras will probably want to including at least one copy of Teamwork, should they decide to go the poverty route.

Second, a deck archetype I call the Charity Gala, with none other than Jenny Barnes in a full support roll. Coupled with Charles Ross, Esq. and Joey "The Rat" Vigil, its main purpose is to bankroll the rest of your team, either by paying for their assets, for straight up giving them money with Teamwork. The Ally exchange part will actually see use as well in this deck; Joey "The Rat" Vigil is a stupidly expensive card, but his effect, and highest health/sanity values, are useful to any investigator, especially if Jenny foots the bill, and Charles Ross, Esq.'s discount affects everyone regardless of who's controlling him.

Third, and while I usually don't advocate begging, I'll make an exception for the poorest investigator in the game bar none; Mark Harrigan. I cannot stress enough how much Mark struggles with economy. Not only is he restricted to guardian, neutral, and lvl 0 tactic cards (AKA "I've had worse…", Emergency Cache, and Act of Desperation), but he also has the fastest draw-engine of all the investigators (which impoverishes him more as he loses out of the one resource stipend gained from drawing cards in the upkeep phase), AND he's disinclined from including the cheapest type of cards in his deck; skill cards, on account of having an on-demand Unexpected Courage most the the time. If you're willing to sell your dignity, then do take Teamwork when playing Mark, because Lord knows he needs every scrap of economy he can get.

Lucaxiom · 997
I don't get it - why does Mark lose out on the upkeep resource again? — TheNameWasTaken · 3 12/10/19
Mark doesn’t struggle that bad with economy. His card advantage is the best out of all Guardians, and Stick to the Plan helps that even further. His resource gen as a result isnt bad either with Ever Vigilant, and Act of Desperation and Thompson 3 go a long way as well. I dont think I would take Teamwork in Mark just for resources. Play E Cache instead? — StyxTBeuford · 1065 12/10/19
I think skill cards are really good as Mark. They complement Sophie's boosts very well! — CaiusDrewart · 1744 12/10/19
Teamwork is strange with bonded cards, like hallowed mirror. It doesn't leave play, so the owner still keeps the bonded cards, but saves a slot. Regarding mark, you don't have to use his ability, if your hand is full but you're missing ressources to play them. — Django · 2534 12/11/19