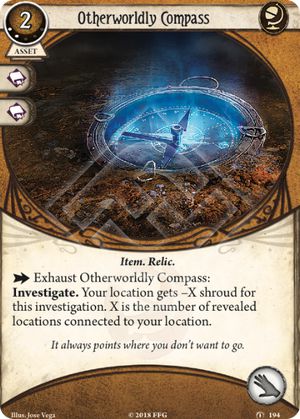 Reducing shroud is a powerful effect in this game, but I suspect that, at least for the moment, Otherworldly Compass is going to have relatively few buyers.

Reducing shroud is usually better than increasing Intellect. That's because if you can reduce test difficulty to 0, you'll succeed on every token except for the autofail. This is why Flashlight is such a great card for investigators with low Intellect, like Zoey or Akachi, because it lets them pick up 3 clues from low-shroud locations nearly guaranteed. Otherworldly Compass has the potential to occasionally knock even a high-shroud location to 0, if everything works out right, which could be really powerful.

The problem is that it comes in the faction where shroud-reducing effects are least useful. If you have really high Intellect, like Seekers do, the advantages of reducing shroud vs. increasing Intellect go away. (Hence I usually don't run Flashlight in Seeker decks.) On Expert, with -6 and -8 tokens in the bag, reducing shroud from 1 to 0 will sometimes make a difference, but not that often. Reducing a 3 or 4 shroud location to 0 would be pretty nice for Seekers; but I think Otherworldly Compass will pretty rarely give you that much.

So for most investigators who can take it, Otherworldly Compass is going to be pretty equivalent to an Intellect bonus to a test of something like +1 to +3, once per round. I suspect getting +1 or +2 is going to be rather more common than getting +3. This makes the card inferior to both Magnifying Glass and Fieldwork, but a reasonable supplement to those cards if you're already running them and want even more Intellect-boosting assets in your deck.

Note that, unlike Magnifying Glass and Fieldwork, you can't combine Otherworldly Compass with other effects that require an Investigate action. So this card is a non-combo with Archaic Glyphs, Deciphered Reality, and so on.

All in all, I think this card is generally going to be substantially worse than Magnifying Glass and even Fieldwork for most Seeker builds. But I think there are two niches for this card. First, if you're a low-Intellect Seeker (Roland being pretty much the only one), this is a reasonable upgrade to Flashlight, with limitless charges and the potential to occasionally crack a 3+ shroud location. Second, if you can combine Otherworldly Compass with other shroud-reducing effects (like Arcane Insight , it looks more attractive. But this approach seems like a lot of investment that Seekers don't necessarily need to make, not even on high levels.

CaiusDrewart · 2403
Nice review and I agree. As an investigate action it conflicts with too many other cards. Ever collected 10 clues with archaic glyphs? In the know? — Django · 3554 8/29/18
Tiny comment - the Compass doesn't stack with Skeleton Key because it sets the final shroud to a fixed value, so no modifiers apply. — TheNameWasTaken · 3 8/29/18
@TheNameWasTaken: You are very right! — CaiusDrewart · 2403 8/29/18
@Django: For sure. If it didn't take an investigate action, this would actually be a really cool combo with In the Know. You could find a good camping spot with 4 revealed locations attached, then fire away at other locations around the map with the massive shroud reduction. That would be pretty janky, but pretty cool. Alas, it is not to be. — CaiusDrewart · 2403 8/29/18
Nice on Roland. The shroud reduction is even more important for him than the average seeker and it has 2 intellect icons, htat means that it combos with Well prepared. You can build a setup where your effective intellect is 5 and locations with 4+ shroud are nonexistent. — Tsuruki23 · 2016 9/14/18
There’s synergy between this card and the new Hemispheric Map, which is also a relic. Sure, it’s no good in Essex, but it could do a lot of heavy lifting in other scenarios like Midnight Masks, The Pallid Mask, Dim Carcosa, etc. — Setzu · 268 10/25/18
I kind of like Otherworldly Compass in an Ursula/Elli/Ornate Bow build that I am working on. The synergy between Otherworldly Compass and Hemispheric Map seems to be a negative though since they both essentially go offline at the same time. It would be great if there was a Seeker accessible accessory that boosted Intellect. Arcane Insight (arcane slot) might fill this role though if there is enough XP available. — TWWaterfalls · 735 11/27/19
2

If one of your team members has a Lola Santiago, Otherworldly Compass can help the as the player playing Lola can trigger Lola's ability in the middle of your Otherworldy Compass investigate test! A nice and repeatable combo, as long as you have the resources for it :).

iceysnowman · 150
Ooh that's cool. So you're at a 4 shroud location, connected to 3 locations. You trigger an Investigate with OC, which reduces shroud to 1. Then you trigger Lola and pay 1 for another clue. Nice! — acotgreave · 141 12/18/19
Why stop there? Surely the same synergy can be achieved with the humble flashlight, or taken to the next level with The Skeleton Key? — Lucaxiom · 2646 12/18/19
Yes, Flashlight and Skeleton Key definitely work too, and have the advantage of [usually] being able to be in the same deck as the Rogue player. However, I think that Otherworldly Compass might be the most easily repeatable shroud decreaser -- Flashlight has 3 supplies, and Skeleton Key can be a little slow if you're moving the key around a lot (plus it's exceptional). I also have a soft spot for Otherworldly Compass though because the art is so pretty... — iceysnowman · 150 12/24/19
Trish Scarborough from the Innsmouth Conspiracy can trigger this combination by herself. — flamebreak · 18 2/1/21