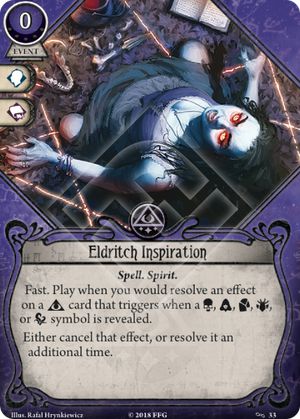 For reference, as of The Circle Undone, here is a list of negative effects that Eldritch Inspiration can be used to mitigate:

Alchemical Transmutation - Take 1 damage.
Astral Travel - Discard an item or ally asset from play, take 1 damage if you cannot.
Blinding Light - Lose 1 action.
Blinding Light (2) - Lose 1 action and take 1 horror.
Mists of R'lyeh & Mists of R'lyeh (2) - Choose and discard a card.
Recharge (2) - Discard the chosen asset. (Note: You still don't get the 3 charges in this case.)
Rite of Seeking & Rite of Seeking (2) & Rite of Seeking (4) - Lose all remaining actions and end your turn.
Seal of the Seventh Sign (5) - Remove 1 charge from Seal of the Seventh Sign.
Shrivelling & Shrivelling (3) - Take 1 horror.
Shrivelling (5) - Take 2 horror.
Storm of Spirits - Deal 1 damage to each investigator at your location.
The Chthonian Stone - Return The Cthonian Stone to your hand.

Here is a list of positive effects that can be doubled using Eldritch Inspiration:

Eldritch Inspiration - Can actually be used on a second copy of itself, but it won't quadruple the effect it will just triple it.
Hypnotic Gaze - Deal an attacking enemy's damage to itself.
Jewel of Aureolus (2) - Draw a card or gain 2 resources.
Recall the Future (2) - +2 skill value for this test (named , , , or token only).
Ritual Candles - +1 skill value for this test.
Song of the Dead (2) - +2 damage ( only).

Note that and on cards will count as triggers for this card, as per the Rules Reference. Father Mateo doesn't actually get an additional benefit from repeating his conversion of to , and Jim Culver's to 0 conversion is static and not a trigger.

The_Wall · 223
I like that this can save charges from Seal of the Seventh Sign. — Django · 3171 2/1/19
The interaction of the card with Rite of Seeking is interesting. If you have the card in your hand, You can safely use Rite of Seeking as your first action. Chances are you will not draw a BS token, since usually only ~1/3 of the chaos tokens are BS ones. You then ignores the drawback of Rite of Seeking without costing anything. It is like Lucky! in this sense. — ak45 · 301 2/2/19
I dont think it would work with Recall the Future or Jewel of Aureolus, since you have to exhaust those cards to trigger their abilities. — iceysnowman · 146 4/22/19
very usefull analis thanksh — el_cyd · 1 5/29/19
@iceysnowman I believe it does since it does only resolves the effect another time. It's not "you can trigger the effect another time", so you skip the cost. — Docteur_Hareng · 1 8/2/19
Father Mateo can get additional benefit via his elder sign effect through The Codex of the Ages, though, AFAICT. — BlankedyBlank · 7 11/1/20
1

After slotting this into an Akachi deck, this feels like an excellent card. As long as you have the deck space, I think any mystic can take this as a great tech card. Mystics don't even have to build around it; putting in cards that are good will guarantee this has plenty of targets. Investigators that can take mystic as a secondary might find themselves with this in hand but nothing to use it on, unless they're Norman (who's really a mystic, if we're being honest).

I think in general, cancelling a bad RoS pull is the best use of this, as has been mentioned. However, there were several times that a bad Shrivelling (5) pull would have killed me that I was able to ignore. Additionally, doubling the effects from Wither and Wither (4) reduces the enemy's fight twice and deals 3 damage with the upgraded version. Doubling the effect on Sixth Sense is pretty pointless, since you replace a replacement effect and still only get one clue, but it can net you 3 clues with Sixth Sense (4). Pretty neat, I think.

SGPrometheus · 301
Also in a Jim bag control deck, this does a lot of work with Song of The Dead and Dark Prophecy/Olive McBride, when those stars align--which is more often than you might think--you've got a 5 damage attack on your hands. — Sycopath · 1 3/25/20
One of these days I'm going to build a Sefina deck with Olive McBride, Song of the Dead, Double or Nothing, Eldritch Inspiration and Double Double. It's a ridiculously jenky combo with an insane amount of moving parts, but in theory it opens up the possibility of doing 18 damage in a single action. Not that you ever actually need to do that, but it would be insanely fun if you could pull it off. — Sassenach · 134 3/25/20
@Sassenach What about that guy in Forgotten Age? The big one who comes back in later scenarios? Kill him in one hit; pow! — SGPrometheus · 301 3/26/20
My favorite usage of Eldritch Inspiration is on SOTD and SOTD is quite underrated since it isn't that difficult to find a Skull now. I usually also include Shrivelling or Rite of Seeking (or both) in those decks and this is really nice with those also. — TWWaterfalls · 703 3/28/20