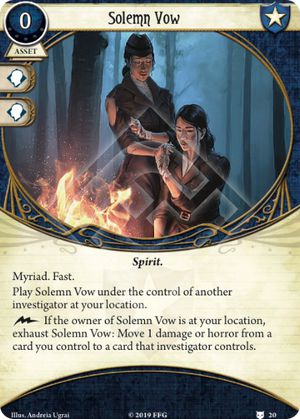 TL:DR, if tanking is your thing, this is now in your deck. Period.

Edit: By tanking in this review I mean the classical term used for roleplaying and videogames, a character who interposes himself between friends and danger and does everything he can to take on as much pressure and pain as he can handle, so that everybody else might do their jobs in peace.

Certain characters are really good at just, taking pain. That's what they do. They'll even do it intentionally for one reason or another. Obviously the characters I speak off are the + combinations Tommy Muldoon and William Yorick. Leo Anderson can do it too but he's not quite so good at it, those other guys don't care if their soaks die, Leo Anderson cares a lot!

Via beefy allies like Guard Dog, Madame Labranche and cheap soaks like Leather Coat and Cherished Keepsake these guys can take twice as much pain as anybody else and keep coming back for more. They can even leverage it into game advantages by taking on the pain for others, with cards like "Let me handle this!" or Heroic Rescue.

Solemn Vow is the new capstone card to this strategy. The key issue with the other cards is that they only apply when the cards are drawn and enemies attack, raw damage and horror however, those are easy as pie to find, and Solemn Vow makes it possible to just funnel all of that bad stuff onto the tanks and their soaks. You might even have a deck totally dedicated to the funneling and management of damage via soaks and healing, using First Aid and/or Painkillers to move the hurt around and make it go away on a choice soak or heal-able target.

It's fast, it's free, you can adjust the number of copies in case this strategy is important, it has 2 icons so the unused copies double as a defense mechanism for the tank himself.

So yes, Tanking, now a far more viable strategy than ever. Even if the "selfless tank" events we've got already didn't exist Solemn Vow single handedly grants viability to this whole strategy.

Tsuruki23 · 1013
Armor of Ardennes? Peter Sylvester? — Django · 2537 10/14/19
The thing is that tanking is, in of itself, not a winning strategy. You survive, but what do you do? This card lets you do the survival FOR your friends, I.E why this card is required — Tsuruki23 · 1013 10/14/19
This card is Carolyn Fern's new favourite. Basically it's a new way of "healing horror" for her, as she can use Peter Sylvestre to soak horror for all the team, while gaining resources in the process. It basically functions as a new horror-healing card for her. The only difference it has from other horror-healing cards is that she is the one that gains the resource instead of the one being healed and it has no limited uses. What's even better is that it costs no actions and it comes at 0 XP. — matt88 · 1583 10/14/19
There's a lot of people that can take maximum advantage of stuff being piled onto them. Tommy is the obvious one since he was in this pack, but Carolyn if she's running Peter Sylvestre is another. It's also a Spirit, so Calvin can take it and boost his stats even faster. I'm a big fan of this card. — StyxTBeuford · 1265 10/15/19
Love the idea of this card. Hate that the way it is written gives away all control over its use. — Kael_Hate · 1 10/18/19
Thoughts on this card for Mark Harrigan? Given his ability of drawing a card each phase he takes damage, seems like you can get an absurd amount of cards by soaking everyone's damage... — NorthernPolarity · 1 11/5/19
William Yorick double loves this because he can use it for two pips first, then play it for free from the discard pile. It one of the few level zero assets with two models of the same skill icon. — jmmeye3 · 244 11/23/19
1

The wording is MOVE damage/horror, so if you're playing Daisy Walker with The Necronomicon in play, you could just move horror action-free to the investigator who put Solemn Vow on you. Very niche but it's a nice cheese.

Big Iron · 22
I think it works : "Weaknesses with a player cardtype are controlled by their bearer". — Okami · 21 4/25/20
just don't do that to the last horror or daisy will never be able to get rid of it — zrayak · 59 4/26/20
Is horror on The Necronomicon a requisite to trigger the action on it? I'm not sure. If not, you can happily move all horror away from the card with Solemn Vow and then just use the action to get rid of the tome. — Lateralis · 1 4/26/20
"Then" requires the previous part to resolve successfully, so it doesnt work if there's no horror on daisies necronomicon. It's similar to self sacrifice where you only draw cards if the test fails (because that's the condition that needs to resolve "successfully"). — crayne · 2 4/26/20
That said, if you remove the last horror with Solemn Vow, the "It cannot leave play while it has 1 or more horror on it." clause in its revelation effect ceases to apply and you can just discard it to free the hand slot if you have enough books to carry — Thatwasademo · 10 4/26/20
And, notably, since Daisy controls when Solemn Vow is used to move things off of her cards, she knows if she has a hand asset to play to overwrite it before she triggers the Vow — Thatwasademo · 10 4/26/20