Play only if there are 10 or more cards in the encounter deck.

Search your bonded cards for 1 copy of The Stars Are Right and shuffle it into the top 10 cards of the encounter deck. 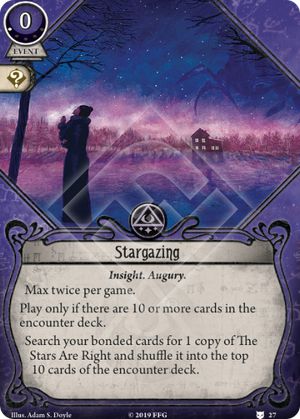 This is a very interesting card. You can't talk about this card without talking about this one here The Stars Are Right which gets shuffled into the encounter deck after it is played. Arkham Horror LCG now has various types of cancellation options to choose from within the game. It is almost getting to a point where I would restrict myself to the number of cancellation effects except when playing Diana Stanley. But, I wouldn't classify this as cancellation.

In all technical sense, this card doesn't "cancel" an effect. When it comes down to it though, you are not drawing an encounter card on the turn that this causes you to draw it's counter-point card The Stars Are Right.

Ward of Protection is the standard often referenced when discussions begin with cancellation effects. So, let's see what this does in comparison even though there are many others. By comparing these two cards we can see the differences and benefits of each.

Ward of Protection is actionless, whereas this card will cost you an action. Ward of Protection on the other hand costs you a resource and a sanity (offset often with other cards that protect you or help you with Agnes Baker, but it is still a cost) whereas Stargazing has no resource cost associated with it. In that sense, the action is somewhat offset by wards other costs. You also will get this action back later when you run across The Stars Are Right and gain a resource and card. So, you could argue that it is actually action efficient. It could be another investigator that decides to take these bonuses, so it has some flexibility there as well.

Ward is useful at almost any point in the game though, whereas this card is only useful when there is enough encounter cards left in the deck (you could get lucky of course and put it on top). So, you might draw this and find yourself not able to play it. In smaller player games such as solo, this could be the 10th card down for instance and there are only 9 turns left in the game. So your action would be wasted if you were to play it. In larger player games, if you see this early then great, you will likely see it being fruitful in your game. But in the larger player count, you also dig into the encounter deck and might find it unplayable for a couple turns mid to late game. So there are some dead-opportunities associated with this card in either situation. These cases that could happen are one of the draw-backs of this card.

It's icon is something that is nice to see here but ward also has this going for it.

Some might argue that you don't know what encounter card you would have drawn in its place with The Stars Are Right. This is where using the term 'cancel' associated with this card isn't appropriate. It is basically saying that in the future, you just don't draw an encounter card that phase and you will get your banked action you spent earlier back (or something will since it is targetable).

Ward of protection is there to keep you from that "Oh sheeet" moment. This doesn't protect you from the cards you know are in that deck waiting for you. It at best delays those cards one turn later into the game.

I think that this is a nice support card for mystics to slow the dangers that are ahead of you and I think I feel better about it in multiplayer scenarios rather than the solo play and just relying on lady luck.

Bronze · 105
It's not especially powerful I think, but it is great fun. You're going to want to include a copy for sure. Also, I wouldn't sleep on the fact that you get to choose which investigator gets the benefit. That could be huge if it gets drawn at the right time. — Sassenach · 89 9/30/19
If you can get it early it becomes solid action economy in solo (since you're seeing one less encounter card that game, you save roughly 1 action overall). I think it'll work best in off class Mystics who are either weak in combat or weak in will. Patrice might like it, as even if she gets it too late to be worthwhile it gives her a wild icon to pitch. Sefina I believe can copy it, though if I'm not mistaken you only get 1 copy of The Stars are Right per Stargazing in your deck, so you'll be making the original card a dead effect. Mandy's Will is just okay and she's quite afraid of enemies, so it could work for her as an early upgrade. — StyxTBeuford · 976 9/30/19
There are two copies in the box, and it's a bonded card so it wouldn't go in the deck anyway. I do kinda wish this could be played 3 times though, it would be incredible with Dayana Esperance. — Sassenach · 89 9/30/19
Right but to have two copies of Stars are Right set aside, you need two copies of Stargazing in your deck, otherwise you'd only have 1 copy of Stars are Right set aside. — StyxTBeuford · 976 9/30/19
Has there been a ruling on that ? All that it says in the rules is "if your deck contains a card that summons one or more bonded cards, those bonded cards are set aside at the start of the game", which can be interpreted differently to the way you described it. I don't see that it would necessarily preclude one copy of Stargazing from being used twice. — Sassenach · 89 9/30/19
I think that's how I would play it for now. It makes sense that if you buy one Stargazing your bonded cards only include one copy of Stars are Right. — StyxTBeuford · 976 10/1/19
The Stars Are Right has bonded to this, but not the other way around. If you had one copy of this and played it twice through various shenanigans, you would add two copies of The Stars Are Right to the top 10 cards of the encounter deck. — The_Wall · 118 10/2/19
If you would play it twice, second time you can bring another #The Stars Are Right. You don't need 2 copies, but it easier to pull out waiting to shuffle your deck otherwise. — Bany · 14 1/3/20
@StyxTBeuford that is not true. Check wordking. You are searching for 1 copy of The Stars Are Right only and exactly when you are playing this card. Not before. There is no preparation phase what so ever. The card is being brought from bonded pool and remove from the game when drawn for a Revelation trigger. Rest bounded cards are still for a use ;) whatever you will get same event to play or it is another copy if it. — Bany · 14 1/5/20
3

This card slow down the threat a lot!

When you got any treachery card, it cost as following

In short, this card pay back you around 2-4 action as soon as you found it.

Especially when the treachery card is punishing on late scenario.

AquaDrehz · 118
This card is soo good in late game when the treachery cards really punish you. I normally take this going into the final scenario whenever I go mystic. — Calprinicus · 989 3/14/20