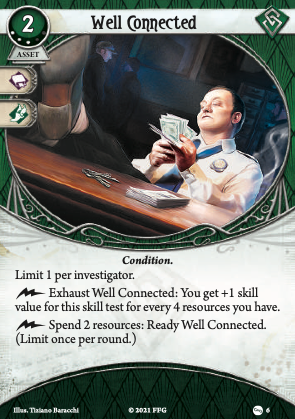 A non-obvious aspect of Well Connected (3)'s ready ability is that its main ability is NOT "limit once per test." You can exhaust it to boost a test, ready it during the same player window, and exhaust again to boost that same test.

This is especially important to know about defensively, sacrificing a few resources in order to pass an important test before you've actually acquired your full hoard of cash. This means that Well Connected (3) can protect you much earlier in the game than Well Connected (0) -- doing so does delay your set-up, but in the case that you're forced to make a "must pass" test (e.g. Frozen in Fear; an untimely Crypt Chill; a must-evade enemy that arrived before you were ready to handle it; or even an early Act-progressing test), that is often worth it.

E.g. this is very useful to keep in mind for Preston Fairmont, who can basically double his test value in a pinch using this trick, and who has an easier time recovering from the expense. And who is likely to be quite vulnerable before being fully set up.

"Ashcan" Pete can also do this trick with a splashed Well Connected (0), by discarding a card to ready it. Pete doesn't generally need protection, but he can use the trick to hit much higher difficulties than expected, or to enable oversuccess if, say, splashing Lucky Cigarette Case or playing Brute Force/Sharp Vision/Expeditious Retreat.