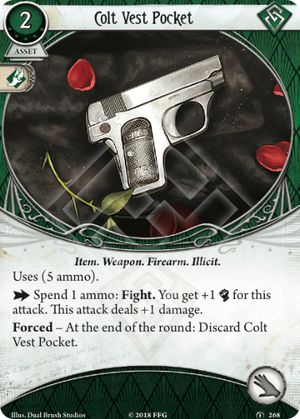 Funny gun and most certainly, bad.

The Colt Vest Pocket is native to a small and specific theme/archetype of who sneak assets into play quickly, it's a build based on the mechanics of cards like Joey "The Rat" Vigil, Sleight of Hand and Fence, I.E you play it quick and action free and deal the damage easily and efficiently.

A few other cards exist to support this, Fence can be used to play Pay Day, so that's a source of economy for the build. Narrow Escape can be used to play the gun when Fence or Joey "The Rat" Vigil are unavailable, certain characters might use it with either variant of "Eat lead!".

Many of the aforementioned cards, notable Joey "The Rat" Vigil, Fence, "Eat lead!" and arguably: Pay Day, are all rather shaky or outright BAD cards. Colt Vest Pocket is by no means the sort of gun that warrants doubling down on a variety of bad cards to try and make them all work properly.

If a character arises who can somehow play weapons the way Leo Anderson can play his allies, then Colt Vest Pocket will rise to recognition, otherwise it will remain on the bottom of the barrel, ready to be scraped up by folks who want to push the limits of deckbuilding.

Edit: After a little extra testing, I got to admit that a Finn Edwards deck with Sleight of Hand and Leo De Luca to get some actions stands a half-good chance to make this card shine. The free evade and extra action can give you space to safely get 3 shots from the gun, Sleight ups that to 4 shots. The card is still bad but it's passable for a 0-xp deck, they are, after all, not particularly powerful at level 0.

Tsuruki23 · 1013
I think there's more support for it than you give credit. Borrowed Time, Swift Reflexes, Quick Thinking (and Double or Nothing), and Ace in the Hole all give you extra actions (as does Skids' ability). You can very easily with Skids have a 5 or 6 round turn, which allows you to use the Colt's 5 charges, which is potentially 10 damage in one turn, which is actually pretty insane. That said the build as it stands is agreeably shaky. Without Beat Cop Skids would just be fighting at 4, so it's fairly likely to miss on that big health enemy you're trying to take down in one go. — StyxTBeuford · 1265 8/6/19
There’s also a cute synergy with The Golden Pocketwatch since repeating the Investigator Phase gives you two turns to unload it before the round ends. — Death by Chocolate · 13 8/6/19
So the problems with this card are: (1) you have to jump through a lot of hoops to take extra actions in order to capitalize on it, and (2) most Rogues only have 3 combat and would rather use weapons with +2 boosts. So if the Colt Vest has a home it is with an investigator who has access to green cards, has a very high combat skill, and can take extra actions in combat. Hmm. — Spritz · 49 8/7/19
Hmm. :) — Death by Chocolate · 13 8/7/19
Man, it's going to be a sad day for Skids once Dream Eaters gets released. — StyxTBeuford · 1265 8/8/19
My thought too. Poor guy lost all of his niches progressively as other folk got released. — Tsuruki23 · 1013 8/26/19
He’s still got Alice Luxley and Ornate Bow. I believe in a future where Skids becomes a reverse Roland. — StyxTBeuford · 1265 9/15/19
3

This gun has appropriately been maligned since its released. A gun that discards itself means at best you can get two shots off with this thing in a normal 3 action round, and that's if there's already an enemy at your location, so you either just took an Attack of Opportunity to play it or you're shooting at something engaged with someone else. Because of the discard clause, you often will be in the situation where you play it into an AoO, as you literally do not have the ability to play this ahead of time. Yes, judging this card in the same way you would judge a normal weapon does not put it in the best light. So let's talk about why the Colt Vest Pocket is actually pretty cool.

Let's get some synergies out of the way first. Fence makes this fast, so if you're running Fence you might consider CVP to go with it, but personally I think Fence is really bad. Action chaining helps you get more shots off the CVP- Borrowed Time, Ace in the Hole, maybe Quick Thinking if your is boosted high enough, you get the picture. Narrow Escape and Dodge can help you against the Attack of Opportunity, the former even giving you a little boost on the first attack you make. The all star card to run this with though every time is Sleight of Hand, especially if you're playing with Taboo where big guns like .45 Thompson and Chicago Typewriter are not so easily concealed. Keeping a CVP up your sleeve means you essentially have a .45 Automatic up your sleeve, except with the potential to fire off one more shot if you can make the actions for it.

And after all of that, even when you do actually play the card by itself, it's really not all that worse than a .45 Automatic. It's half as expensive in resources, and at its absolute worst fires for half the shots. Again, the big downside is the very likely Attack of Opportunity for not being able to play the card until the turn you need it, but aside from soak you can use other cards to mitigate this. Of course sinking two cards into a lite .45 Automatic starts to look bad again, and worse than that, 's don't have great scores. Most of them hover around 3 which is fairly mediocre, certainly not high enough to even want a .45 Automatic most of the time, and they're more than willing to shell out the extra two resources to pay for it over CVP (and usually they'd go for another two resources after that just for .45 Thompson).

Enter Tony Morgan. He gets an extra fight action a turn pretty much the whole game. His is 5, so he would love a .45 Automatic lite. His ability to fight makes him a natural fit for over-success which fuels Quick Thinking for more actions. His bounties can help him pay for Leo De Luca. With a single Sleight of Hand you could very feasibly fire off all 5 shots in Tony and actually land most or all of them. That's 10 damage. Lupara, .41 Derringer, even his signature colts at most do 6. And then you could play it again next round, and probably land another 3 or 4 shots. Sure, theoretically you could actually play a melee weapon like Kukri or Switchblade and land more damage in one of those than any gun, but CVP gets high damage in very few actions for almost no cost or effort on Tony's part. Even Knuckleduster carries a lot more risk given that most high health enemies tend to have high fight values.

Now all of that said, the big downside of using the CVP this way is simply that you don't always have a point where you'd even want to do 10 damage. There are some really big bads out there in this game, but they're not in every scenario, and it's very possible you'll upgrade CVP before you get to fight them. So here's what you can do to make CVP work for you. 1. Play in multiplayer where you can more easily make your shots worthwhile, 2. take Adaptable and throw in CVP in scenarios where you know a big bad is coming and you need to dish out the pain (in addition to your other weapons, not as a replacement; also consider "Let God sort them out..." for such a scenario), 3. stay close to your fellow investigators so that you're more likely to have to fight several enemies at once for them, and 4. make sure you load up on icons, as the last thing you want to do is fire off 5 shots at your friends instead of all the monsters. Crystallizer of Dreams can help with icons with cards like Act of Desperation or Scene of the Crime, but otherwise you have skills like Quick Thinking, Overpower, Daring, Steadfast, Stunning Blow, Inquiring Mind, and Unexpected Courage. splash also has Lucky! which is obviously solid insurance.

I think that if this had been a fast asset, then it would have been appealing on its own. Even if it cost an experience at that point it would likely have been worth it. But, if you are planning on using Sleight of Hand, then I think there are likely better options you are looking for than this. You will have a limited number of Sleights, and certainly getting use out of a Lightning Gun or Chicago Typewriter are the kind of situations you are likely looking for. This could be the intermediate weapon you upgrade from into one of those depending on who you are playing while the Sleight of Hand is in your deck until you have the experience to get that.

Without the fast though, I wouldn't use it by itself and I don't see it seeing much play other than the temporary slot before an upgraded weapon for Sleight of Hand.

This card seems like it needs other cards in order to work well. Here's a list of cards that it appears designed to integrate with:

This is a weapon you definitely only want to play when you really need it. Narrow Escape is nice, because you can wait until an enemy shows up, play this card, then use Narrow Escape to get +2 to the first attack. Sleight of Hand is nice to make this weapon fast and to make it last for more than 1 turn. Out-of-class, "Eat lead!" is the only way available to use all of that ammunition short of some serious shenanigans.

A lot of cards have anti-synergy with this weapon. It should go without saying that Custom Ammunition, Extra Ammunition, and Venturer shouldn't be used for it. It's just a waste!

The card's nearest in-faction comparison is the .41 Derringer. Do you want a good gun for one turn, or an okay gun that will last you for 3 shots? Overall, I think you might get slightly more mileage out of the .41 Derringer. However, the Colt Vest Pocket does have its uses. It's not a long-term combat solution, and you need cards to support it, but it can do some damage in a pinch.

How does this work? It has 5 ammo. You spend one action and one ammo to fight. How is one meant to use up all 5 ammo in one round? I can think of Gold Pocket Watch or Ace in the Hole, but I am not a fan of cards needing other cards just to be serviceable.