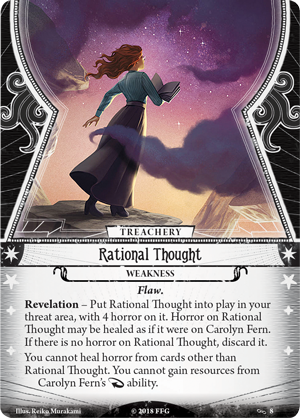 “I think it started when I burnt down my house. But a woman with a torch told me to. You see, the rooms were all changing places...”

Carolyn looked down at her yellow legal pad, where her notes were simply “cult psycho“ and a doodle of a cat.

I don’t think there’s a signature weakness in this LCG that goes from “game threatening” to “not a big deal” between scenarios one and three. It’s amazing.

In your first scenario, you’re likely clearing one horror per action. That’s four actions this card eats up, four bucks you don’t get, and four horror teammates whine at you about. When you get ancient stones: minds in harmony, you can heal horror passively. You’ll delete this weakness automatically after a while, or by actively drawing cards. By scenario 3, your draw engine should be better, which means hypnotic therapy may be in your tableau... Someone could play deep knowledge on you and automatically get rid of your weakness.

“The dreams are getting stranger, and I can’t focus on finals at all. It’s an undersea kingdom...”

Carolyn handed over a flier. “You’re distressed because you’re a horrific mermaid. I need you to see this magician tonight and head over to a city that’s even worse than Arkham. You’ll also want a shirtless pirate and a spy. Before you go, there should be a bible right over by your lounge...”

This has been updated to match my "Signature Weakness Project." I have done my best to make sure that the original content isn't altered too much, out of respect for any comments.

A very investigator-focused signature weakness. Looking at the two elements, the effect and the discard condition, we get:

The effect: At the start of a campaign, this card eats up about 4 actions, blocks Dr. Fern from useful horror healing, and messes up her economy for at least 2 turns. Which is pretty severe. The only way to mitigate it is get better horror healing, which comes with XP. A the start, horror healing acceleration is limited to Logical Reasoning, Soothing Melody, and Hypnotic Therapy. As XP accrues, 2 point healing gets reasonably common (which can be boosted to 3 with Hypnotic Therapy), and Logical Reasoning (4) can clear it in one action, if you have 2 clues. Ancient Stone:Minds in Harmony (4) can even do it as a reaction, assuming you can get 4 secrets on it and draw 4 cards. I personally like the idea of Kerosene,just because it seems like such an extreme therapy.... In most cases, a reasonably experienced Carolyn will clear it in 2 actions, which is not too bad.

The discard condition: Heal 4 horror off it, which, as noted above, gets easier as XP accrues.

When you think about it, this is an average signature weakness, maybe barely above average at low XP.

Box vs book It's better than To Fight the Black Wind in most situations, and it's paired with a much more useful signature asset, so most player will chose the "box" pair rather than the "book" set or doubling up, especially since having this and the Black Wind out at the same time are a horrible synergy.