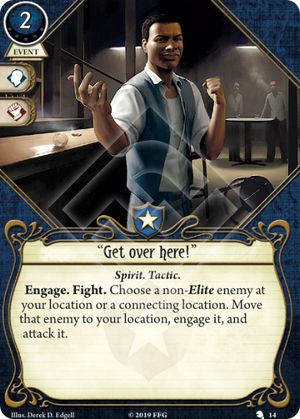 This thing is super expensive for an attack that deals 1 damage (Hey Randall Cho, I have a card for you!). That said, teleporting an enemy to you is GREAT, even if the attack misses!

Not a terrific card, but it's got enough versatility to be useful.

So because of the ruling on deciphered reality this card is "engage an enemy, fight an enemy, engage a non elite enemy at a connecting location then fight them"

So did they ever re-rule that or is it still that case that without an "instead" clause all bold actions also make you perform that effect in addition to the text. seems like the intent is you are doing the bold actions with the following alterations.

Or is this card just meant to be fight two people at once and I've been under playing it all this time?

Zerogrim · 224
You’re definitely just fighting and engaging one enemy. — StyxTBeuford · 12593 3/11/21
There's no ambiguity here. This is a Fight and Engage action, modified by the fact that you can move a non-elite enemy to your location before performing the engage and fight. The "instead" ruling applies to the result of skill tests, not to action designators. — suika · 8170 3/11/21
Action designators don't have an "instead" applied to them, otherwise Decoy would require that you also perform an evade test and Seeking Answers would also give you a normal investigate. — suika · 8170 3/11/21
The general principle to follow here is that if a card tells you to do the action(s) its action designators indicate in some particular way, that's a modification of those actions not an additional effect, but if a card tells you to do something not strictly related to those actions, it is an additional effect. So, for instance, Deciphered Reality doesn't make you do another investigate check with its first sentence, but its second sentence doesn't replace the normal effects of the check it does make, either. — Thatwasademo · 41 3/11/21
Or, for this card, the "engage it" and "attack it" instructions set the timing and target of the Engage and Fight actions, rather than being additional effects, but moving the enemy is an additional effect. Which does raise a question... if there was a non-elite enemy that couldn't move, could you still engage it with "Get over here!" and thus effectively move it anyway? — Thatwasademo · 41 3/11/21
Also, Deciphered Reality does not have the "instead of discovering clues" clause, which means the "If you succeed" effect on Deciphered adds to the standard investigate action. Get Over Here does not have any of those additional effects on success, rather its Engage and Fight actions are merely modified to do something else. — toastsushi · 62 3/11/21
@thatwasademo to your last question no? It would definitely depend on the wording. If the card had some "cannot" text then that can't be countermanded by any effect whatsoever. However, it is written permissively such that the move can fail but the engage and attack effects can succeed. However, the card probably still works as written based on targeting effects. Since the fight action can only target enemies at your location (barring effects that say otherwise) if get over here cannot result in an enemy being moved, engaged, or fought then both the targeting would fail and the card wouldn't initate in the first place because it couldn't change the game state. — Sycopath · 1 3/11/21
Hmm, @Sycopath, I think it would still attack it because it has specified an enemy (even at a connecting location) and there are no conditional ‘then’s in the ability. While the move and engage effects would inherently fail if it cannot move, the attack can be resolved. — Death by Chocolate · 979 3/12/21
1

I think this card can be situational (for 1 data point, I had fairly little use for it in my recent Carcosa/2-player campaign), but it had strong synergy with Zoey Samaras for specific spectacular situations, mostly because of 2 things:

I’m mostly sad that it and it’s updated version can’t do anything about SPOILER, otherwise it would have scorpioned two potential birds with one stone.

If I have an enemy already engaged with me and play "Get over here!" on a different enemy at a connecting location, does that provoke an attack of opportunity?

JetLeisten · 2
My reading is it does not trigger an op attack. This card has the fight action designator. Op attacks trigger if you spend an action other than to fight, evade, resign, or parley. The fact that this is also a Play action and an Engage action doesn't change the fact that it is a Fight action, and thus avoids op attacks. For comparison, consider that any weapon with a Fight action is also an Activate action. So if this triggered op attacks, It would follow that the Activate action on every weapon also triggers op attacks — NarkasisBroon · 1 10/18/20
Is nobody else bothered that it leads with "Engage. Fight."? Usually, these keywords mean "do this basic action. Then if the card has more text, do that too". However, a literal reading of the card would suggest that you get to engage, then fight, then vacuum up a distant dude and engage and fight him too. Compare this with Counterpunch, which says "Fight. Also, here's a targeting restriction for this fight action". On the other hand, the design intent seems pretty clear. — jaunt · 4 11/13/20
0

GrueneLupenAufheben · 41
No, it's the same as you can't use the Fight action on a Machete to trigger the Fight action on a .45 Automatic. But I would recommend asking such basic questions rather on BGG rules forum. — Susumu · 165 10/23/21
r/arkhamhorrorlcg is another great place to get questions answered. ArkhamDB is not structured for Q&A. — Death by Chocolate · 979 10/23/21
0

I was wondering - does the "Fight" on this card (and similar Event-cards) triggers effects on Cards like "Frozen in Fear" (https://arkhamdb.com/card/01164) or the "Hunted by Byakats" from Barkham Horror?

They force you to spend something (an additional action / a ressource) to perform a "Fight" Action. Is the "action" you are performing with an Event card not a "Play a card from your hand" Action that just happens to have that "Fight" effect?

Ratboy · 1
As long as it actually invokes the Fight, Move, or Evade action designator (in bold; as opposed to just happening to deal damage, cause you to move, or evade / exhaust and disengage enemies), and as long as it does actually cost an action (fast events and free triggers don't count as actions even if they invoke an action designator), Frozen in Fear will make Play or Activate actions cost an additional action. — Thatwasademo · 41 1/1/21
I think also in this particular case, unlike the example in the FAQ of using Duke to investigate a location with an additional cost, since the additional cost of Frozen in Fear is a cost to "perform one of the listed actions" rather than to "fight [any enemy, or some particular enemy]", you can't play the event at all unless you can pay the additional cost. The entire action of 'Get over here!' is all three of a play action, an engage action, and a fight action. — Thatwasademo · 41 1/1/21
(contrast, say, if there was some enemy with an additional cost to engage it that you couldn't pay, per that FAQ entry you could play 'Get over here!', move it to your location, and fight it without engaging it; or if an enemy had an additional cost to fight it which you couldn't pay, you could still use 'Get over here!' to move it to your location and engage it, but if you could pay the additional costs in either of those cases you'd be required to even if it was highly disadvantageous, like taking your last point of damage) — Thatwasademo · 41 1/1/21
@Thatwasademo, are you saying that playing this card spends three actions, rather than one? — komarinth · 1 1/3/21
@komarinth No, he's saying you'd need to pay any additional costs for each of those things because all three are happening at once. So if you had an enemy that said, "As an additional cost to fight the enemy discard cards with two agility icons" - you'd still have to do that. — Time4Tiddy · 172 1/3/21
0

Can I choose an elite enemy at my location to engage and attack him or the text saying non-elite apply also to the engage/fight words ? I would say yes but i'm not sure. This is expensive just to win an action but it could help sometimes.

eldiran · 2
You cannot play it without choosing a legal target (the legal target being a non-Elite enemy at your location or a connecting location, which you can do at least one of "move it to your location", "engage it", or "attack it" to. — Yenreb · 15 10/9/20
) — Yenreb · 15 10/9/20
This card is pretty awesome in my opinion provided that you have enough combat to land basic fight actions. The big benefit is for aloof enemies like Whipoorwhills but it saves you an action against Hunter enemies that will move into your location next turn and attack you. Usually you have to move to their location and then you only have two actions left to fight them. Another really useful benefit is when you have 3 enemies at one location that you have to go to. You can move one of them into your location and fight it this round and then jump into the fray. — TWWaterfalls · 781 10/10/20
Thanks Yenreb for the rule point — eldiran · 2 10/11/20
So for cards like this or similar events (Clean them out, One Two Punch, etc.), can your fight from this card be the triggered ability on a weapon asset you control like a gun? — robo224 · 1 8/9/21
@robo224 No, those actions are separate and cannot be combined with these events. — natronics · 1 8/27/21