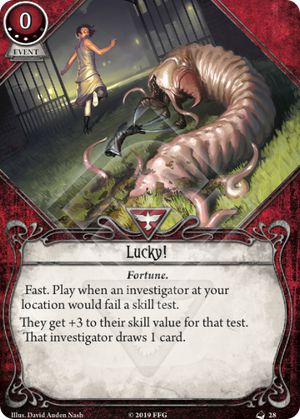 Lucky! (3) saves you 1 resource, 1 extra point to your skill value - giving 50% extra breathing room on your tests... AND it can be used on another investigator.

And all that for 1 experience!

AquaDrehz is right that this third version and Parallel Skids's spicy Deckbuilding Options allows you to bring 6 copies of Lucky! (2x each of level 0, 2, and 3) for 10xp. But why stop there?

Let's take a closer look at his Additional Options. "When you upgrade a Fortune or Gambit card, you may instead pay the full experience cost on the higher level version and leave the lower level version in your deck (it does not count towards your deck size or the number of copies of that card in your deck)."

Now, hold up - buying a level 0 to replace a higher level version of itself, can we do that? Yup. It's already fairly standard practice if you want to change what Strange Solution you got (refer to its FAQ entry) after you got greedy and careless.

For a grand total of 19 Lucky!'s of various levels. 17 of which don't count towards your deck size or card limit. Worth it? Probably not. Tasty? Definitely.

Realistically though, you probably don't want that many copies of Lucky! (0) in your deck unless you have enough other draw because it doesn't cycle, so maybe just stick to the stronger versions. We start with 2x Lucky! (0) (because why not?) and special upgrade them up to level 2 and then 3, but this time we purchase new level 2's to replace the 3's and do an abridged loop costing 5xp per loop.

Much less chaff, an extra level 3, and 4 xp left over to maybe buy yourself something nice.

(You could also pull this trick to get 10 copies of Hot Streak or 19 copies of any other Fortune/Gambit with level 0/2 versions. "Look what I found!", A Chance Encounter, Daredevil, Dumb Luck, Oops!, or Daring Maneuver. Daredevil deserves special mention because you can use it to get +19 on any skill test and turn your deck into a pile of 6 weaknesses!)

This card goes so much better with a Fire Axe + Dark Horse build Survivors. Other versions have to balance the +1 damage and +1 stat with the flexibility from Lucky!, but this version does not have that restriction since it can be played at 0 resources! To top it off, we get an extra +1 and can play it on friends to boot.

This card make for "Skids" O'Toole (Paralled) . With new deck building option he can put all 6 Lucky !!!! and recurring use Lucky to any test!!!

For another investigator it still be good to use because -3 would appeared more often on higher difficulty. The this card cost 0 so it not annoy you resource gained from upkeep.