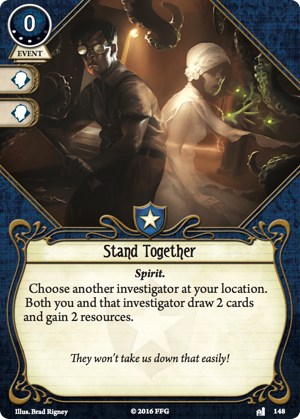 A simple card, but a highly effective one for multiplayer Guardians. You spend one action, and the team essentially nets +3 cards and +4 resources in exchange (remembering here that Stand Together is itself a card you're giving up). That's pretty awesome. Compare Emergency Cache II, where you spend an action for essentially +0 cards and +3 resources. Or Cryptic Research, where you spend zero actions for +2 cards. Now, both those cards beat Stand Together in terms of flexibility (since you can play them when you're alone, or in the case of Cryptic Research even when you're engaged with an enemy), but in terms of efficiency, Stand Together just crushes both of them.

Stand Together shines the brightest when played Turn 1. Lots of investigators have multi-card setups that cost 6-7 resources, and Stand Together facilitates that. Zoey and Roland want to play Machete and Beat Cop (7 resources). Daisy wants Old Book of Lore and Dr. Milan Christopher (7 resources). Wendy wants Fire Axe and Leo De Luca (7 resources). Agnes wants Shrivelling and Peter Sylvestre (6 resources). Stand Together is just perfect here. It not only gives investigators higher odds of drawing these key assets, but it lets them get them all into play right away without having to use the inefficient "take a resource" action. This really gets things off to a roaring start.

Stand Together will of course still be good if drawn later in the game. It also offers double Will icons to be used in an emergency. Obviously, playing it for the event is better, but that's another nice little benefit over something like Emergency Cache.

Now, this doesn't mean two copies of Stand Together are an automatic choice for a Guardian's first 6 XP. There are plenty of other strong options. Beat Cop II is one of the best cards in the game. Keen Eye is underpriced and overpowered, like all the stat-boosting XP permanents. A super-weapon like Lightning Gun is not a bad idea, either. But Stand Together is definitely competitive with all of these, and a great thing to pick up before the campaign is done.

Call me basic, but this is probably my favorite card in the game.

About a year ago, my group started playing single faction campaigns (all investigators are same faction). Now, Stand Together was already a pretty good card, but hoo boy - if everyone on your team is packing two copies, its power is amplified significantly. All four of us (Roland, Zoey, Mark, and Carolyn) spent our first 6XP from the Dunwich campiagn (Expert) on this card and never looked back.

This card is always helpful - and it's especially great on turn 1, as others have noted. But it's downright bonkers when you get to be the player of this card AND the beneficiary of a teammate's play of this card in the same round. If you are playing multiple Guardians, and whole team mulligans hard for this card, it's fairly common for everyone to have get a copy in their opening hand. You can increase your odds even further once you have Stick to the Plan in play to thin your deck (more on this in a minute). And of course, even if your teammates don't find it in their initial draw, you might be able to help them fish it out with your own play of Stand Together - teamwork makes the dream work!

If your whole team plays this on turn 1, then the net result is that each investigator spends one action to start the game with 8 cards and 9 resources (except for the Lead investigator, who will get their payoff from whoever takes their turn last). For our resource-hungry Guardians, this is a great way to hit the ground running.

Probably the most noteworthy combo is with Ever Vigilant. After a few scenarios, you'll likely have it tucked away under Stick to the Plan, but even before that, you'll have a reasonable chance of drawing it, even if you only have one copy. With all of the extra cards and resources at your disposal, it's much easier to maximize its efficiency as you are much more likely to have three playable assets in your hand. There's nothing quite as satisfying as having your Seeker-focused Roland play Dr. Milan Christopher, Flashlight, and Magnifying Glass for four resources with one action. After Zoey and Mark are similarly set up, you'll almost feel sorry for any enemy unlucky enough to spawn at your location. Almost.

Another benefit to such early drawing is that a lot of Guardians like to draw their weaknesses as early as possible early, and this opening gambit helps you make that happen.

Sometimes it's just about the simple things.

bricklebrite · 289
I like this card too. My main qualm is that Paranoia and Amnesia interact very painfully here, if either of the two investigators has it. — CaiusDrewart · 2403 10/18/19
I like the theme, artwork and effect, but I only get this at the end of the campaign if I have excess XP — Alogon · 708 10/19/19
I do like this card a lot, but 3XP prices this card just out of "auto-include" range to "semi-luxury". Especially as you'll want 2 of, 6XP is a lot to invest when there are things like Beat Cop and a big power weapon and Stick to the Plan, etc, to save for. I would love this card soo much more at 2XP. This usually ends up being a mid-to-late game campaign add for me. — c-hung · 3 1/2/20