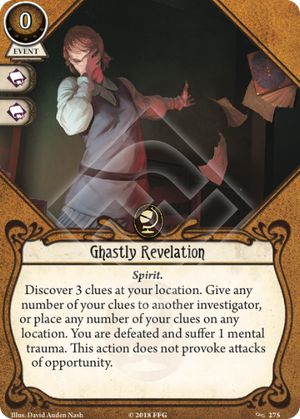 TCU's Seeker version of "I'll see you in hell!" Ghastly Revelation offers the promise of an extremely powerful and efficient action that could completely swing a scenario, but with the substantial cost of defeating your investigator and taking a trauma. Just like "I'll see you in hell!" Ghastly Revelation has the Spirit trait, and thus is available to Calvin Wright who is actually incentivised to take trauma.

When is Ghastly Revelation good? Being defeated is bad because it means your investigator can no longer contribute to completing the scenario or gathering xp from Victory enemies and locations, so its massive cost can be mitigated when it is played right at the end of a scenario - just like you might be able to ignore enemies and some treacheries drawn with Delve Too Deep when you're about to advance the final act. For this reason, Ghastly Revelation is only going to be good when discovering three clues at once is going to close out a scenario, and you didn't have some other easy way of gettining those clues (or if you were otherwise sure to be defeated before you could win).

But Ghastly Revelation is a Seeker card - the class already filled with high intellect investigators and many other ways to gain clues quickly - the same problem "I'll see you in hell!" has by being a Guardian card. Heck, Ghastly Revelation's two intellect icons would help you get at least one of the three clues playing it would. At least it's still good for committing to a skill test! On top of that, even if you do mitigate your investigator's defeat, you are burdened with a trauma for the remainder of your campaign. This is a tough sell, but it might be worth it to take a trauma to finish a crucial scenario - and unlike it's Guardian counterpart that can't defeat Elites, Ghastly Revelation will actually end some scenarios by discovering the last clues your team needs to advance.

All this means Ghastly Revelation is likely to only be played by everyone's favourite gay Survivor and I'll certainly try it in Calvin for those moments where I can help my team close out a scenario. Would've loved this for my Doomed Calvin run of Forgotten Age to keep me from advancing that weakness - alas, his final hour came during the very last scenario.

Trinity_ · 173
I'm running it in a Daisy deck currently. I've used it to bail out before taking a fifth damage. Even only gaining one clue, it was worth escaping a third physical trauma. — CSerpent · 93 7/29/19
Nice that you can also move your clues to a non-VP location with this as well. Being eliminated on a VP location suxxx. — Zinjanthropus · 162 10/24/20
I think it's a nice one-of card to take in Carolyn; with 9 base sanity she already has a huge pool to work with, and since healing horror is something she wants to do often anyway *starting* with 1 horror isn't really a bad thing. — Prinny_wizzard · 108 11/2/20