: Attach a non-weakness Spell event from your hand to Dayana Esperence. Limit 1 event attached to her.

The attached event may be played as if it were in your hand. It is not placed in your discard pile after it is played (it remains attached). As an additional cost to play the attached event, exhaust Dayana Esperence and spend 1 secret. 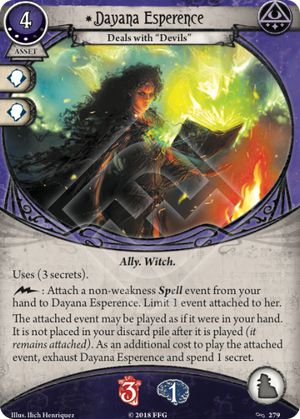 I think the new Dream-Eaters cycle gives Dayana Esperence so much more variety to experiment with. She can help investigating (Read the Signs), become an awesome battlemage (Spectral Razor), help fragile mystics move around (Ethereal Form) or even become sort of an arcane initiate replacement (Lucid Dreaming or Word of Command). Some of these options may be a little expensive, but should be no problem for Diana Stanley, Agnes Baker or even a resourceful Jim Culver. What a fantastic expansion to an already fabulous ally.

galge · 9
in the preview the links worked. Read the Signs / Spectral Razor / Etheral Form / Lucid Dreaming / Word of Command should be the linked cards. — galge · 9 2/1/20
ah nevermind these two comments. — galge · 9 2/1/20
I played her with Luke Robinson on 3 player through forgotten age and she's really strong with above events, especially with his ability. Very helpful to kill adjacent cultists or evade engaged enemies. Astounding revelation adds secrets to her with Arcane initiate, Lucid Dreaming and Word of command. — Django · 2537 2/3/20
As you've mentioned, I think the primary restraining factor of Dayana Esperence using all of those spells is the cost involved. Since the event must be played, it means you have to ante up the resource cost to play it every time, on top of the four cost of Dayana herself. Then, it becomes a matter of whether it's worth running Spectral Razor over Shriveling, Ethereal Form over Mists, or Read the Signs over Rite of Seeking. I think in these cases, it becomes a matter of consistency versus flexibility. — Ruduen · 256 2/5/20
I’ve had great success using Dayana with Blood Rite (from the Occult Lexicon). It’s a cheap and flexible utility knife of a spell that I can always find a use for and never have enough copies. — Death by Chocolate · 13 2/6/20
3

Looks like the best spell to attach is Blood-Rite! This combo can be used with Akachi Onyele, Jim Culver and Marie Lambeau. Of these, I like it with Marie Lambeau best because she can also attach her special event, Mystifying Song, to give the investigator(s) up to 3 extra turns!

Edit 3/4/2020: Rewritten to represent a much changed selection of spell events.

Dayana Esperence is a crazy powerful card, but she is expensive to run. The trick is to have a strong money engine or cheap enough cards to keep her up and running.

More importantly than her health however is the tripled spell event ability. Many events are strong enough to warrant playing by themselves, Ward of Protection, Deny Existence and their upgrades are among the most useful cards in the game and getting triple the amount of cancelling from them is outrageously good, especially Ward of Protection which can blanket protect the team and Deny Existence which is, for obvious reasons, incredible. Be mindful about using a tripled Ward of Protection though, that's 3 horror on top of whatever the scenario throws at you.

Because Dayana and the repeat casting of a spell will often be very expensive, absolutely make sure to bring methods to fund the combos, cards/combos like Forbidden Knowledge+Peter or Alchemical Transmutation might be needed to keep this build rolling. Absolutely make sure to pick up whatever out of faction resource cards are available to you, including Crack the Case, Easy Mark or Take Heart as appropriate.

Aside from the cancels, many other spells are good enough to want to play them repeatedly and there's a few spells that start off weak but being able to play them 3 times makes the mechanics much more interesting. Here is a list of every spell Dayana can triple:

Tsuruki23 · 1018
Moonlight Ritual is potentially huge as well. It allows mystics to heavily rock the doom effects. — Sassenach · 107 9/18/19
Some good points. Putting a counter on her with Diana is pretty cool, gaining a ressource and drawing a card each time, while not losing the counter. Moonlight ritual is also pretty cool, if you go crazy with 1 or 2 blood pacts. — Django · 2537 9/18/19
Why wouldn’t you lose the counter? Diana’s ability would still put the card under her, so it will no longer be attached to Dayana, and be pretty wasteful unless you did it only on the third use. — Death by Chocolate · 13 9/19/19
Question about her and Time warp - Time warp's text say to return the game state to how it was before the event, including it's cost. Normally what prevents you from playing it over and over is having to discard it, but she doesn't discard it. And the secret spent is part of the cost. If even seems timewarp would have you un-exhaust her. So it seems that you could just play time warp over and over, unlimited. I feel like I must be missing something. — khoshekh · 1 1/22/20
You don't rollback the cost of Time Warp. Exhausting Dayana and spending a secret becomes part of the cost. — Yenreb · 1 1/24/20
With Diana you might move your card from Dayana under Diana because you drew into a card you really wanted on Dayana after having settled for a card you kinda wanted on her. Or just because your weakness hit and you really need to refuel your will. — Yenreb · 1 1/24/20
According to the comments on Time Warp, https://arkhamdb.com/card/03311, you do roll back the cost on her. — khoshekh · 1 1/25/20
More specifically, it says the cost of playing timewarp is reset. Timewarp itself is not returned to your hand because it's in an 'inbetween state' while the reset is happening. But the cost you paid happened before the reversal, so it's reset. In normal use, as long as you have the resources to play it, you get them back, so it's essentially free. Now, when attached to Diana, this really seems to me that it'd make her exhaust/secret reset too. — khoshekh · 1 1/25/20
To avoid confusing players who may stumble across this, khoshekh is incorrect. The comments there predate the FAQ erratum that came out over a year ago. Any costs to pay for Time Warp are not reset. — eapfel · 1 3/24/20
1

Can't wait to try this card out . There are so many powerful options that you can attach to her. One underrated option that I want to attempt is Moonlight Ritual. Let's say you're Marie with both David Renfield and De Vermis Mysteriis running. This would allow you to run really high on doom effects knowing that doom cancellation is right there on tap multiple times. Marie can also take Truth from Fiction as a splash card, along with a number of really good insight cards to recur. You could potentially use Moonlight Ritual up to 5 times (or more with recursion), allowing you to run with big resources, semi-permanent will boost from Renfield and the ability to keep replaying key spells. I'm not quite there yet with the deck, but it could be a lot of fun.

The other one I like of course is Deny Existence. Multiple cancels on tap is great, esp if you're playing a more fighty mystic like Akachi. Ward of Protection for certain scenarios would be insanely useful, Blood-Rite would be great of course. For certain big money mystic builds the forthcoming Storm of Spirits(3) could be in play.

Oh, and I should add that the 3 health on this ally is great.

Sassenach · 107
I can personally attest to the power of Deny Existence (5) on Dayana Esperence. That single combination completely removed *all threat* from a recent run through of A Phantom of Truth: conviction version. — The_Wall · 170 7/15/19
0

There are so many great spell events to choose from. Deny Existence Drawn to the Flame, Uncage the Soul, etc. Since she works on secrets you can use Truth from Fiction to increase her uses. I think she would be fun to build around.

How does this card interact with Mystifying Song or The Painted World? Are they removed from the game after one use because Dayana only prevents events attached to her from being discarded? I'm aware Sefina Rousseau can't take Dayana Esperence herself, but in some unlikely setup, she might get her if someone uses Teamwork.

Other question, what about Time Warp, does it cancel the costs of Dayana Esperence as well? I think not because it only cancels the effects of the canceled action?

Django · 2537
The Painted World is removed instead of discarding it, but with Dayana it is not discarded, so there is no effect to replace. — Adny · 1 7/8/19
The secret + exhaust is additional cost to play the Time Warp, so as per its errata, it is not undone — Adny · 1 7/8/19
But you cannot multiply Mystifying Song, as it is "removed from the game". While Painted World id only removed if discarded, there is no such loophole for Mystifying Song. — vidinufi · 31 12/13/19