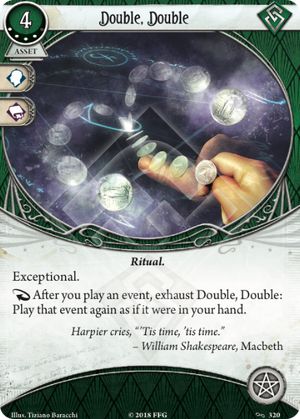 Alright enough of that. Clearly this is a Sefina Rousseau card. Get some extra value from The Painted World, a card that normally is restricted to three plays a game. Because Painted World becomes a copy of whatever card you play it as initially, I'm fairly sure you'd have to play that same event again if you Double, Double it, instead of getting to change targets, but that's okay. There's a lot of cards worth doubling: Drawn to the Flame, Sneak Attack, Backstab, Swift Reflexes, Narrow Escape, Hot Streak. Some events wont benefit well from this (Ward of Protection, Drawn to the Flame on lower player counts, Sure Gamble), but overall you'll probably get more than enough value out of it to make it worthwhile. Hot Streak is already a very powerful Sefina card when combined with Lola Santiago, so doubling it seems strong. Speaking of Lola and Hot Streak, Preston Fairmont likes this card as well. Preston relies on events to do anything (Intel Report, Decoy, Small Favor, "Look what I found!") so this could be very valuable action economy for him. Oh, and there's also Ace in the Hole.

That said I'm not fully sure how some of the timing would work there. Could you use it to discover four clues with "Look what I found!"? Could Sefina double Think on Your Feet and move two locations instead of one, or can she not double the card since she didn't draw another enemy? I'm not sure how the timing works here. Still, I'm sure there will be plenty of targets for this card. Two paragraphs.

StyxTBeuford · 12683
What Money Talks does is change the type of a skill test from ‘whatever it is’ to a resource skill test. Playing it again with Double, Double would then change it (again) to a resource skill test - i.e. no actual effect besides exhausting Double, Double. — Death by Chocolate · 1105 7/27/19
Ah yes you're right. I'll edit that out. — StyxTBeuford · 12683 7/27/19
Double thumbs up for this post. Doubled. — mythosmeeple · 392 7/28/19
This reply is here to make sure there are 4 comments on this review. — StyxTBeuford · 12683 7/28/19
Do you pay for the event a second time? — dotPeddy · 1 8/22/19
Yes — Alogon · 836 8/22/19
I'm really scared of one thing "play it again as if it were in your hand". Does that mean that you have to pay the cost again ? Action and all ? I don't think so because it would make the card so mediocre in comparison of its cost, but a confirmation would be appreciated. — Docteur_Hareng · 1 9/19/19
You pay the cost, not the action. — StyxTBeuford · 12683 9/25/19
> Could Sefina double Think on Your Feet and move two locations instead of one — Steinbran · 1 12/14/19
"Could Sefina double Think on Your Feet and move two locations instead of one." Of course not, you have to replay the event as if it were in your hand. When you move the first time, the trigger for TOYF is no longer met. Same with "Because Painted World becomes a copy of whatever card you play it as initially, I'm fairly sure you'd have to play that same event again if you Double, Double it" TPW is played "as a copy" but doesn't "become" that other card. Once it's removed from play it is simply a regular TPW (which is why it doesn't work with e.g. Delve to Deep). — Steinbran · 1 12/14/19
This is just to verify playing it with Hot Streak. You collect the resources from the first Hot Streak and can use those to pay for Double, Double replayed Hot Streak. That is how I interpret the card but I have made plenty of mistakes in this game before. — TWWaterfalls · 832 12/17/19
I want to know very clearly whether the effect of this card will make me pay for the action again，thank you very much. — zephyr1001 · 1 1/11/20
Does "Double, Double" replay the same card or does it create another instance of a card that is an exact copy of the event you just played which you then may play during that window? — Kaldaran · 1 1/15/20
It says "Play that card again..." So I think it plays that card. There's no concept of creating a copy of a card described in the rulebook (up to this release; Swarm does use that term I think) — Yenreb · 15 1/23/20
@Zephyr The effect of playing the copy is not done as an action- it's timed as part of the reaction ability on Double Double. It's the same thing as the Guardian card "Ever Vigilant", where for one action you play 3 assets at once. You do have to pay the cost of the event again. — StyxTBeuford · 12683 1/26/20
Saw a deck, recently that used this to double Lucid Dreaming in order to grab both other copies of Three Aces. Seems like a decent combo, if not quite as strong as Mandy's ability. — Zinjanthropus · 199 5/25/20
11

We discovered a nifty little combo with this and Scrounge for Supplies. If you can draw both copies of Scrounge, you can double-play one to bring back the other Scrounge plus another card from your discard pile. Then you can repeat this every 1-2 turns to bring back cards from the discard at will. Of note, this combo costs no resources once the Double, Double is in play, and only one action each time you bring back the card (the same one action it would take to draw a card from your deck), although it uses up your Double, Double effect for the turn. The effect is potentially very strong, especially in the late game, but can only get back level 0 cards. Since Scrounge is a pretty good card anyways, it is a no-brainer for any investigator who will be taking Double, Double.

Finn Edwards, Jenny Barnes, Preston Fairmont and Tony Morgan can use this combo, and other Rogues can use Versatile to get the 2 scrounges.

jmmeye3 · 570
This seems particularly strong for Preston recurring lots of powerful level 0 events, such as "Look what I found!", Intel Report, and Trial By Fire. — Trinity_ · 181 6/3/20
"Dynamite Jenny"? — mogwen · 243 6/3/20
Agreed that this is great with Preston. Recurring dynamite blast would be fun, though expensive even for Jenny! — jmmeye3 · 570 6/4/20
Do you really need both Scrounge for supplies? When you play it, you resolve the first event, you take your 0 lvl card from discard and you put scrounge in discard (point 4th of appendice 1 - reference guide). You active Double, Double (reaction + after means that you have to resolve completely the activation element - so going throw the point 4 of appendice 1 )- you play the copy and scrounge is already in the discard pile. — eldiran · 2 7/8/20
According to the most recent FAQ the altered game state of "as if" effects while being resolved are valid for any other card. So while you are playing scroung for supplies a second time due to double double, you are playing it "as if" it were in your hand, so during this whole resolution it's not considered in your discard pile and it can't target itself. — Killbray · 3357 11/13/20
You can get Scrounge for Supplies back from the initial, 'legit' playing, no? You play it, it goes immediately to discard, and then you take it back with Scrounge's effect? Then with the 'doubled' playing take the other card you wanted. — BlankedyBlank · 15 1/11/21
Sadly, Finn Edwards cannot take Double, Double. — elkeinkrad · 297 2/17/21
Quite a powerful card, perhaps a game changer. However, so far my favourite combo is with backpack and emergency cache..... both the basic card and the upgrades. Also good with burning the midnight oil and crack the case. — gitty · 1 4/9/21
2

There were ideas to use Double, Double with "You owe me one!" to steal multiple cards. But i think it is much better to steal an event and double it.

I'm thinking cards like No Stone Unturned, Cryptic Research, Stand Together or Recharge

Currently the deck builder allows you to put two of these in a deck. Being fuzzy on the rules for 'exceptional' I did that. Yes I realize it means I've been cheating for quite a few scenarios but I just want to say that having two copies in play is the most glorious thing I've seen in any game so far :p

jmccrary · 12
You could actually legally have two copies in play - one of your own, and one played from someone else's hand with You Owe Me One. — TheNameWasTaken · 3 1/30/20
Only if you don't care about losing friendships... — Sassenach · 158 1/30/20
Couldn't you use a second copy of You Owe Me One to take a third copy from a second (former) friend? — cb42 · 32 1/30/20
Depends on the investigator. It would need 3 arcane slots so it would have to be somebody with mystic access, although I guess Versatile is a thing. — Sassenach · 158 1/30/20
(1) Play 2 Sign Magicks as Sef, then steal 1 copy each from Jenny and Preston. Then have Skids give you his with Teamwork. (2) ???? (3) Profit? — bricklebrite · 377 1/31/20
Oops, Teamwork doesn't work on Rituals. I knew that card was crap! — bricklebrite · 377 1/31/20
Maybe play Double Double on "You Owe me One" to steal twice? I think that works. Now, if only we could figure out a way to get 5 copies in play... — bricklebrite · 377 1/31/20
The duplicated event still takes an action, so even with Leo you can only benefit from so many Doubles... unless of course you're using them all to double Ace in the Hole :p — jmccrary · 12 1/31/20
Why would the duplicated event still take an action? The trigger on Double Double tells you to play that card. See also Joey "the Rat" or "You owe me one". — Yenreb · 15 1/31/20
The duplicated event does not take an action. We have so many cards that work similarly that show this is the case- Easy Mark, Tony's Long Colt, Ever Vigilant, You Owe Me One, Joey, the list goes on. — StyxTBeuford · 12683 1/31/20
I think - I could be wrong- that @ jmccrary's point is that playing the event in the first place, before duplicating it, takes an action, so you need extra actions to use more than three Double Doubles/per turn. But honestly, if you've built your entire team around giving four copies of Double Double to Sefina, then I guess you're going to build in a way to use all four :). — bee123 · 24 2/1/20
Because it has the text "as if it were in your hand" and playing a non-fast event from hand requires an action, does that not mean the duplicate requires an action? — Halo99 · 1 2/2/20
It does not, as playing a card is not inherently an action. Playing is am action you can take, just like taking 1 resource is an action you can take. If a card tells you to gain a resource as a result of its effect, you dont pay an action for that resource. Same principle- this is a reaction trigger, and the effect is you get to play the event. It doesn’t take an action because its an effect that’s part of the react trigger. — StyxTBeuford · 12683 2/3/20
If you YOMO'd a couple of copies of this to Sefina, and were playing without the taboo list, you could get like a million extra actions with Ace in the Hole (by a million, I mean 12, because teams are generally limited to 4 players) — Zinjanthropus · 199 7/6/20