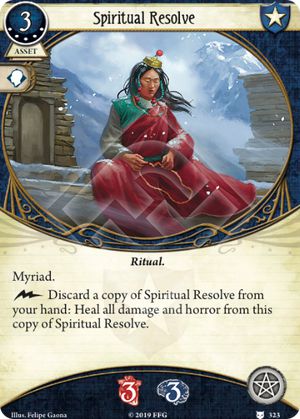 A fast draw deck that can find it and heal it quick will be walking through fire without a scratch! It's cheap and therefore usable by money starved characters like Roland Banks and Mark Harrigan, Zoey is also good with it.

This card is a steal for 5 XP.

Right now this card has just one "just right" fit, in Mark Harrigan who'se ability to draw very fast and need for both horror and health tanks line up to make this a core part of a mid-high level Mark Harrigan deck. It's a fine method to make every character reasonably tanky without breaking the bank.

Tommy Muldoon seems like he might want this card but really, his abilities dont line up with it, his draw is too slow and his card slots are already commited to other cards that align with his ability better. It's better to put the xp into Charisma and play beefy allies who will net you similar tank volume and some useful mechanics while they're at it too.

Tsuruki23 · 1008
Why wouldn't Tommy just allow this card to be defeated instead of using the free action discard to heal the damage? It would cost 3R and an action to play the next one but he would be making a profit from the first one being defeated. — TWWaterfalls · 418 5/10/20
He could, or he could get more value from other tank cards that he wants to fill his deck with. — Tsuruki23 · 1008 5/10/20
Don't most of those other better tank cards occupy contested slots though? — TWWaterfalls · 418 5/10/20
@TWWaterfalls They do, but when you're using beat cop, BroX, or agency backup, you can expect those slots to open back up sooner rather than later. Even if you want the fight boost from beat cop forever, you can just take charisma and give yourself more of those contested slots. I'm not saying (and I don't think Tsuruki 23 is saying this either) that it's wrong if you take this as Tommy, we just think there are better uses for your deck slots. I don't think anyone's going to say that 18 soak for 5xp, in an uncontested slot, isn't good. — SGPrometheus · 204 5/10/20
Ill add a bit more clarity to the review. — Tsuruki23 · 1008 5/10/20
I just disagree with Tommy not wanting this. You dont use the healing ability on it, but the fact that his draw is poor actually makes this- a 3 of for only 5xp- more attractive, not less. And of course it doesnt take any contested slots. This is a great Tommy card. — StyxTBeuford · 1064 5/11/20

The Eye of Truth 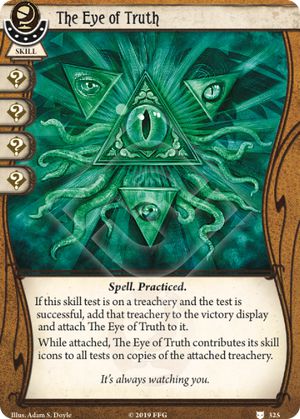 As a 4x skill card you can beat some surprising tests, a hard scenario test, a parlay, but treachery tests is where it'S at. On one hand you can filter out a bad treachery by sneaking it aside, and you make the other copies of it easier too! Many late-campaign treacheries will murder you if you get hit! Also makes stuff like Frozen in Fear less nasty.

Great card, but is it worth 5 XP? Not at the start, no. Not worth slowing down a research card or some key asset. It's a great use for XP once youre post-20 XP. 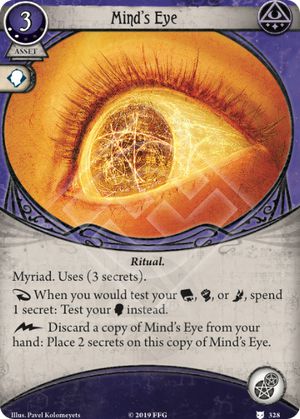 Use for any check. A rather brilliant effect that occupies the entirety of the class's most important asset slot.

First off, rules wise, keep in mind that you may not keep existing bonuses that might be in place for the tests you're replacing, if you use Mind's Eye to change an attack with an Knife for example, into a test you loose the +fight from the Knife because it's specifically a +.

Furthermore, since the test is changed when it's initiated, you cannnot commit cards of the original type to the test, thus you cannot commit a Deduction or Vicious Blow to Mind's Eye tests.

Mind's Eye unlocks a new role for characters to play. Usually a plays the "Flex", someone who can kill enemies and get clues, but often only after opening a certain window of power (I.E, buffing and playing the appropriate spell assets).

The new role is "Manager", the character who greases up gameplay for the team by digging out teammates, getting key evades, clues or just sniping a hard skill test required by a scenario card. Using Mind's Eye and some classic buffs a can punch an Acolyte and turn right around to pull up a clue from a 4+ shroud location and then parlay a tricky scenario card, all in the same turn and make it look easy!

One issue to Mind's Eye is that it's a way to beat tests, but it does'nt speed you up any, there is no damage bonus, no extra clues. You can however use it to swap around stats on some very weird tests, an investigation attempt with a Flashlight, executing an "I've got a plan!" or Waylay, obviously you can also play some tricks with guns and tools that grab clues or deal damage.

That said, it can still be slow going to use Mind's Eye for everything and charges are limited, so lean into that Manager role and use it not to get everything done yourself, use it to make sure everybody else is operating at top efficiency.

You can build some interesting and fresh variations of characters with this card, it really shines bright in off-class characters, especially Patrice Hathaway.

Tsuruki23 · 1008
I think this card is useless for most mystics as it has too few secrets and there's too few ways to recharge. Occupying 2 arcane slots its also very hard to get a subsitute like sixth sense into play, to help win the scenario. But might be helpful for offclass mystics like marie to ocasionally fight or evade. — Django · 2530 5/10/20
Where is marie an offclass mystic? Especially since her bonus-spell actions would be wasted a lot of times — niklas1meyer · 1 5/10/20 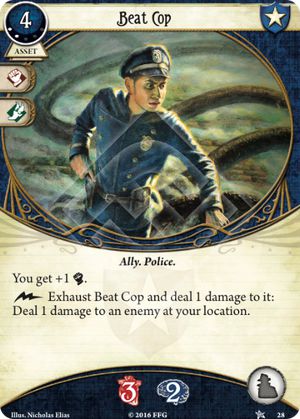 I've just upgraded my Beat Cop in a Tommy deck. This version of the card synergises really well with his investigator power, because I can use BC++ to take a horror for me in a pinch, then churn through BC++'s health to deal damage every turn and recycle him back into my deck for resources - using this strat I should get at least 3 which is enough to buy in Guard Dog or Tetsuo Mori, 4 if I take a horror on BC++ at some point, and against the right enemy (or an Elder Sign at the right time) then I can get five back to get RGM or Brother Xavier out.

What's more, the fact that I don't have to engage to use BC++'s power means I can knock health off Aloof enemies (hello Stranger) without spending actions while I crack on with something else (setup, investigating, or just hoofing it to the exit at the end of a scenario)!

Note that you are allowed to play this card even if you do not have a clue. The ability on this card has two separate effects, and they are not linked by a "then," so both occur if possible irrespective of the other. Separately (but just as importantly), this card when played will always change the board state because the card will always be remove from the game.

H/t to AK45526 on the reddit board for pointing this out.